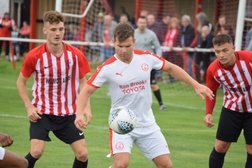 We expect Friday's game to be a massive test
Anton Broughton

Graham Street Prims will playing Ilkeston Town FC's U23 side in their final pre-season friendly of the summer this Friday, 4th September for a 19:45 kick-off.

Anton Broughton & Matt McCaul's side will look to end their pre-season on a high note following Saturday's 5-2 defeat away at Aylestone Park.

"Ilkeston have a great track record in bringing through young talent and we expect Friday's game to be a massive test" said joint manager Broughton.

Following the feedback from the fans after last week's Rocester game, the club have decided to extent the 'pay what you like' scheme to cover this game also.