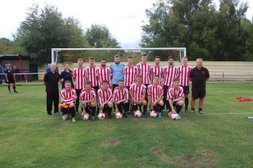 Prim's crush Arnold 6-1 top score for the second week in succession.
Prim's followed last weeks 7-0 away win against Greenwood Meadows with an emphatic 6-1 home win against Arnold Town.
Lee Sutton lead the scoring with a hat trick his opening goal coming seconds before the half time whistle, reward for the hard work and pressure the team had maintained against a responsive Arnold team.

Prim's captain Sam Kellogg scored to make it 2-0 early in the second half, his back heel following a corner deceiving Ross Cherry in the Arnold goal.
Domonic Wilkinson providing width down the Prim's right was next to find the net with a spectacular shot from just outside the Arnold penalty area.
Striker Mthabisi Mlauzi playing in his first full game since joining Prim's added a fourth goal, an explosive shot beating keeper Cherry into the roof of the net from a similar distance.
Sutton's striking display continued with a second and then his hat trick goal as Prim's dominated the entire second half. Arnold's consolation goal came from a free kick in the 90th minute, James Price striking a superb ball into the top corner of the Prim's goal with keeper Joshua O'Brien having little or no chance of making a save.

ps.
Prim's performance watched by 50 plus spectators at a rain soaked
Baytree Cars Arena noting that this result was achieved with their leading goal scorer James Rushby away representing Derbyshire at tennis.