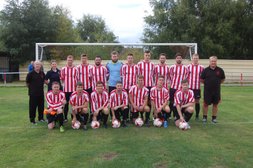 Prim's took the lead in the 28th minute Mikey Fitzhugh firing the ball into the Barrow goal following a fine pass from James Rushby. Barrow pressed and their equaliser came in the 35th minuts a crashing header from Ben Law as Prim's failed to clear the danger.

Both teams sensed a win on the cards and fought hard throughout the half.
The winning goal came in the 83rd minute, Nduoma Chilaka found space at the far post to beat Joshwa O'Brien in the Prim's goal for the match winner.