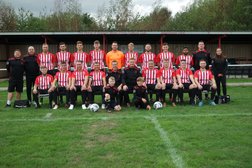 Prims keeper Dan Brown, after a dislocated finger, returned for the first home game of the season against Dunkirk. There was also a debut for Fenwick Butcher in the heart of the defence.
It was even for the first 15 minutes with perhaps Dunkirk just shading it with them having the best chances but Brown was not really tested, his first save of note was when he tipped over a Shannon-Lewis freekick. Prims then started to get chances for themselves. Ollie Ball and Lee Fell both had headers that Mitchell in goal for Dunkirk saved low down, turning the ball round the post for corners. The best chance for Prims fell in the twenty ninth minute when Fell put Kial Thurman through but with only the goalkeeper to beat shot against his legs. Neither team really created much for the remainder of the half as the final ball let both sides down when in good positions. Prims had looked more solid throughout the first half and deserved to go in at the break level.
Into the second half and within the first five minutes George Lynam was booked for a poor challenge on Adam Morley, the game was held up for fifteen minutes while treatment was given and the player was taken off on a stretcher.
It was Dunkirk who had the majority of the play but Prims defence stood firm. The best chance fell to Shannon-Lewis but when clean through Brown made an excellent save. Prims best chance came from Luke Gratton whose twenty yard effort went narrowly wide with the keeper beaten.
In the last twenty minutes each team had a player sent to the sin bin but neither side could take advantage of the extra player. After eighteen minutes added time the game ended in a stalemate.