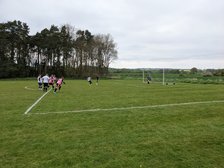 Grantham take the spoils in the Lincolnshire Derby

A Rawdon hattrick and a De Benedictis Screamer seals the win

A derby day to remember

The stage was set 01/05/22, 14:00 the Lincolnshire derby a match that the Griffins had been preparing for extremely hard on the training ground, the lads were up for this one, they were not leaving the pitch without a win and what a win it was!!

The Griffins shaped up in a solid 4-2-3-1 formation with the aim of dominating the midfield and controlling the pace of the game.

Grantham were without both first choice goalkeepers through injury so Jones kindly volunteered to be the man between the sticks, little did he know he would have to put on an inspired performance throughout the course of the game. Debuts were also handed to Bonsor, Carroll and Stanhope.

The Griffins started brightly and with pace from kick off with the forward line applying the press on the Lincoln back line, forcing them backwards , within the first minute Lincoln were having to defend a corner. Lincoln managed to clear their lines but not well enough as Grantham got another corner delivered by Thomas but unfortunately no fruit.

Grantham were already showing their intentions only 6 minutes into the game, they wanted this match they wanted the bragging rights!

7 minutes in after a beautiful passage of play in the midfield, Stanhope bough the ball down and with some brilliant hold up play was able to play in Redley, where he took the ball out wide on the right and skinned his man out on the wing and delivered a sublime cross beating the keeper and centre backs to find Rawdon at the back post. 1 nil- first blood Grantham!

Lincoln wanted back in the game immediately but Grantham's back line were solid with Rourke and Thomas sat just in front of them, any attacking passes were roundly intercepted and dealt with.

In the 11th minute, the travelling Imps registered their first shot however they failed to trouble Jones, the stand in keeper. Then in the 13th minute Lincoln got a corner which they swung in at the Griffins keeper who despite his best efforts to deal with it managed to punch it against the underside of his bar and it went in. 1 each the derby game was on now!

For the next twenty minutes the game was all Grantham, the possession was dominated by the Griffins. In this period Grantham registered another 8 shots against the Lincoln keeper. Grantham were controlling the game at this point, the midfield of Briggs, Rourke and Thomas were dominating the game everything was going through them. On the half hour mark Thomas came off after rolling his ankle and the Griffins welcomed the return of De Benedictis who had returned from a short term injury.

Within minutes of coming on De Benedictis picked up the ball around 35-40 yards from goal on the left of midfield, and you could see his eyes light up . With no one closing him down and in acres of space he went for the unthinkable. A sidewinder of shot that had a vicious bend on it completely wrong footed the visiting keeper and banged in top bins of the far corner. No keeping that one out, That was a goal of the season the contender.

The last ten minutes of the first half saw various changes in possession for both teams with both the Griffins and the Imps registering shots but without reward, Stanhope went close for Grantham just before the break but was left hunting for a debut goal.

Half time Grantham go in as the leaders after an absolutely amazing 45 minutes where they really stamped their presence on the game, what would the next 45 minutes bring?

The second half kicked off and you could see straight from the off the Griffins wanted this game within the first minute of the second half a corner for Grantham, taken by Briggs it failed to find a Grantham head and was cleared for another corner, Rawdon managed to get a shot off but was unfortunately wide of the mark.

The next 10 minutes or so again saw interchangeable play between the two teams with the Imps registering 3 shots, all of them high, wide and not very handsome.

However in the 59th minute, a ball through the Grantham defensive line who were playing a really high press allowed Lincoln to exploit the left wing and cut into the penalty area, and get a shot off, a fantastic diving save from Jones couldn't keep it however as it was parried to the waiting Imps striker on the back post for a close range tap in, 2-2 again the Derby game was back on!

Grantham went looking for another immediately, registering another 3 shots in 5 minutes with Redley, Meredith and Briggs all going close but for no reward.

A dodgy call from the ref

In the 67th minute Lincoln broke through the Griffins defensive line and with Imps striker appearing to be in on goal, a fantastic tracking run from Slack in RB appeared to be showing the Imps striker wide, a great defensive effort. The Imps striker went down after the coming to shoulder to shoulder with Slack and handled the ball, surely a Grantham freekick for handball, but no the Ref had just awarded a lifeline to Lincoln and pointed to the penalty spot. That had to be the softest penalty ever given. The Imps striker placed the ball down and slotted home from 12 yards out. 2-3 in Lincolns favour.

The Griffins really had to bed in at this point, and with some superb defensive play from both Bonfield and Bonsor, the Griffins were still in the game.

Carroll, Briggs, Redley and Rawdon all went close but again with no reward, was the game slipping away from the Griffins, were Lincoln going to hold onto their slender advantage.

After a period of quite scrappy play with various fouls being given against either team due to some really tired legs, in the 80th minute Rourke found himself out on the left on the edge of the 18 yard box and cut in onto his right foot and placed a perfect in swinging ball to Rawdon who had run from deep for a volley across the keeper at the back post, beaut of an assist and a beaut of a goal. 3 each and the derby was back on.

The 88th minute saw probably the most pivotal moment of the game with Imps clear through on goal all they had to do was slot home and the game was theirs however an absolutely inspired save from the stand in keeper kept the game wide open.

Was it a red card?

The 89th saw probably the worst tackle ever, off the ball and out of nowhere Taylor on the halfway line, two footed one of the Lincoln midfielders from no where bringing him down into a crumpling heap. It was surely a red card, everyone on the touchline thought it was red but the ref didn't agree and Taylor walked away with a yellow, a very lucky yellow.

After a 3-4 minute delay in play saw Lincoln line up with the freekick, after playing it wide Thomas found himself having to give away a freekick to prevent Lincoln being through on goal. A selfless tackle which he was lucky not to be booked for.

The 91st minute saw Redley denied by the bar from 25 yards it was looking more and more likely that the spoils would be shared.

The 92nd minute it was Lincolns game to win, with their left winger through on goal just him and the keeper he fluffed his lines and spooned it well wide of the goal.

Only a couple of minutes to go and with referee checking his watch Redley played a through ball from deep on the left wing to Rawdon who had made a run through the centre into the box, with a touch to bring it down and a touch to control it he took it past the two back peddling centre backs and was lining up for the shot when he was brought down by the Imps keeper.

PENALTY!!!! In the 94 minute surely this was the last kick of the game.

With Rawdon on for a hat trick it was always his penalty to take. He placed the ball down and with a short run up he went for placement, the keeper dived too early made contact but not enough to keep it out.

With the final kick of the game the Griffins had won the Lincolnshire derby from the penalty spot in the 94th, the subs were on the pitch the manager, it was absolute scenes.

A hattrick for the captain, Rawdon. A 35 yard screamer for De Benedictis. Two penalties, a should have been red card.

The Griffins jubilant, the Imps dejected. The derby belonged to Grantham. What a game, what a game!