WHAT ARE WE ABOUT

Grantham Town Supporters Club has existed in various forms going right back to the 1950's (possibly earlier!). Its' latest reformation took place in 1997. At the time, support was increasing after many years in the doldrums. A group of supporters wanted to do more to raise money and represent supporters' interests. Re-formed on the back of a change in lottery, the Supporters club has carried on doing what it set out to do ever since.

The aims of the Supporters Club are still as they were when it was re-formed in 1997. The club has three main aims: 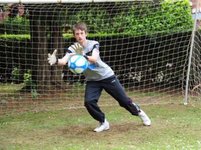 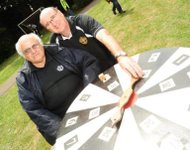 Grantham Town Supporters Club members regularly raise funds by 'Beat The Goalie' and 'Spin The Wheel' at local events (pictures thanks to the Grantham Journal).

Since 1997, the club has raised between £200,000 and £300,000 for GTFC. This has been donated to Grantham Town Football Club for a number of uses over the years. The Supporters Club paid the whole £45,000 CVA on behalf of the football club in the years between 1999 and 2004, at the same time making donations to cover the cost of away travel for the first team. With the CVA paid off, the Supporters Club have covered the printing costs of the match day programme for the football club as well as continuing to cover away travel costs.

When needed, the Supporters Club have made funds available to purchase training kit and help where they can, including a sizeable proportion of the transfer fee that brought Dave Taylor back to the club in 1997.

The Supporters Club still runs a successful lottery. For only £1 a week, fans have the chance to win weekly cash prizes; the first prize is currently £200 each week. Fred Jones, Lottery Manager, will happily enrol you as a lottery member. For further details of the lottery go to the lottery page

THE BENEFITS AND HOW DO I JOIN

To join the Supporters club costs £10 for an adult and £5.00 for a child. This is for a full membership year. You will be sent a reminder to re-new your membership for the next year. Members receive:

10% discount on club shop merchandise
Reduced cost on Supporters Club travel
Discount on future membership
To join click on the link below for an application form. You can print it off and mail it to us at the club details on the contact page or you can send it to us with an E mail again via the contact page