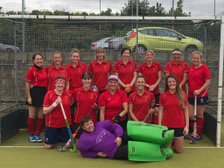 Gravesend made a promising start to the game and some well executed passing between the midfields and forwards resulted in a goal scoring opportunity however couldn’t convert. A counter break from Anchorians saw them take a 1-0 lead. The opposition continued to attack and managed 2 more goals in quick succession.
With a 3-0 deficit, Gravesend continued to battle and were eventually rewarded when a stray ball was rescued by Gravesend and fired down to Kerry Jewiss who fired it past the Anchorians goalkeeper. The second Gravesend goal came shortly after, neatly popped into the goal by Linda Spiers, after some slick passing and a brilliant cross from Kerry Jewiss.
At half time the score was 3-2 with the second half starting slow due to both teams feeling the heat and soaking up the pressure. Gravesend finally managed to tie up the score when a well saved short corner shot was lifted over the keeper and defence into the goal by Hannah Campbell.
Unfortunately, it was a short-lived tie for Gravesend and even the amazing defending from Charnleigh Stapley, Odette Kelham, Di Prior and Tina Pay could not stop Anchorians from scoring 2 more well executed goals leaving the final score 5-3.
Next Game: Saturday 21st September 10:30 v Sevenoaks Ladies’ 5s. Away.
Share via
FacebookTwitter
https://www.pitchero.com/clubs
Recent news