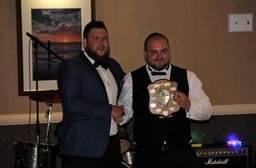 George Wilson received the 1st XV Players Player of the Year, Prop Forward Wilson was ever present in the 1st XV during the season, and was the keystone of the Pack.

2nd XV Players Player of the Year was awarded to Callum Courtney, Courtney playing in his first year of Rugby proved his versatility by switching between backs and forwards during the season, his strong tackling and running were a great asset to the team. Courtney was also awarded Coaches players of the year by head coach Simon Ruddick.

Captain Jimmy Dwyer awarded 2nd XV Captain’s Player of the Year to Josh Evans Evans had great 1st season, playing mostly at second row, with the occasional appearance in the backs. Evans was also awarded Young Player of the Year.

Chairman Asa Morrison presented Kate Leggett with Clubman of the year in recognition of all her work in the club over the past year. In her role as Treasurer. Kate has been instrumental in ensuring the club has a firm financial base for the future.

2nd XV Captain Jimmy Dwyer was awarded Club Sportsman of the year in recognition of his ‘can do’ attitude both off and on the pitch, and regularly running the bar.

Big thank you to everyone who made the awards night a great success.