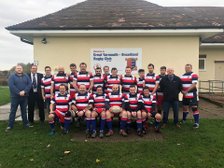 A game of 2 halves

Great Yarmouth Broadland Rugby Club hosted Lakenham and Hewitt on Saturday, a new addition to the league, replacing a Norwich side struggling to fulfil fixtures. GYBRFC went into the game without captain George Wilson, side-lined with a shoulder injury. There had been another reshuffle in the backs with Ant Payne coming to inside centre and Marcus Lekerman dropping to full back.
GYBRFC started the game with the wind behind, which, despite still blowing with it’s normal force through Cobholm Playing field, had changed direction to blow from end to end. L&H were first to get points on the board, they played smartly and converted an early penalty, ensuring they left the Broadland 22 with points to show. GYBRFC quickly began to show their league experience with a series of quick fire tries. Firstly, Jay Pollard was able to go over in the corner after a bullish pick from Liam Haylett at the base of a scrum. This was followed by a score for Jacob Wells, who went in at the other corner after the backs moved the ball freely through the hands. Liam Haylett then went over for his own try, converted by Ollie Millar. Followed by Ben Collings who finished off a lovely offloading move. Liam Haylett crashed through the middle for his second, and Jacob Wells went over again in the corner adding another to his tally, all three converted by James Doggett. GYBRFC ended the first half 38-3 up.
Unfortunately, the second half was a different story, playing with the wind behind them L&H began to control the game. GYBRFC did not seem to be able to get a foothold in the match and soon began leaking tries after 1 up tackles began to be missed. Ben Collings put in a solid performance holding up and preventing 2 tries! With the game drawing to a close and no clear answer for what the score was, matters were made worse when Jacob Wells was given a yellow card for a deliberate knock on leaving GYBRFC with 14 men for most of the final quarter. With the last act of the game L&H converted a penalty to seal a losing bonus point and make a real statement to why they belong in this division, this was a side that was unrecognisable to previous seasons white washes.
GYBRFC won the game 38 points to 31. Next week GYBRFC travel to Norwich Medics, GYBRFC won the last meeting 15-7. There are lots of work ons for training on Tuesday evening at 19:00, all are welcome.
Share via
FacebookTwitter
https://www.pitchero.com/clubs
Recent news