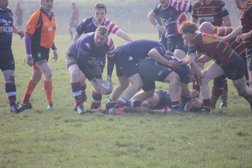 Great Yarmouth-Broadland RFC 2XV - 74
Norwich 3XV - 0
On a sunny Saturday afternoon the tigers hosted another home league fixture, this time they were up against Norwich 3s. In a game that if they were to win would secure promotion from eastern counties four north.
The game started and Great Yarmouth was receiving the kick off. The kick was caught expertly by flanker James Dudley, who linked up well with the backs. This linkup between forwards and back worked well as after ten minutes of trucking the ball up the field the tigers were rewarded with the first score of the day, which came in the form of Matt Beckett crashing through the defence to score his first try of the day. This score spurred on the home side to gain another and with some great powerful running by Kieran Wilkes and Stacey Ledgerwood flanker Liam Haylett found a gap in the defence to score the second try of the day only five minutes after the first try. After the restart from the Haylett try some great defensive kicking gave Norwich a lineout five meters out from their own try line. A mishap at the Norwich lineout allowed Kieran Wilkes to sneak in and score a sly try. Unfortunately the try came with some bad news as centre Chris Calnon picked up an injury, so on came experienced Paul Abel to replace him. After the game started again Great Yarmouth took firm control of the hotly contested game with great rucking by forwards Liam Lovick and Asa Morrison, the pressure gained the home side a lineout on Norwich’s twenty two meter line. At the lineout the tigers pulled out a play straight from the training ground and left the away team bamboozled, which meant the ball ended up in the hands of centre Tom Weston who slalomed his was over the score line to put more points on the board for the tigers. Shortly after not to be outdone by the other backs full back Rob Burling used his quick footwork and his timed sidesteps to score the forth try of the game. Great Yarmouth wanting to strike while the iron was hot started moving again up the field with a sequence of powerful drives and mauls, this culminated in prop Matt Beckett picking up his second try from five meters out. The game restarted with only a few minutes left of the half and the tigers got the ball back out to the backs again from kick off. After some great teamwork and handling it led to winger Jamie Murray blitzing down the wing to score the next try and end the half.
Seven minutes into the second half the tigers got themselves into another scoring position, up step Matt Beckett again to crash over the line and complete his hat trick of tries. After Norwich made a handful of changes to bring on fresh legs, the home side needed to keep up the pressure. They did this all around the pitch especially with some amazing scrummaging with the help of James Dwyer who was causing problems for his opposite number. From this pressure the tigers scored two tries in quick succession, both from well worked lineouts from the forwards pack. The first try came from a massive drive which allowed Captain Liam Lovick to storm down the blind side to score from five meters out. In similar fashion from another driving maul from the lineout Prop Matt Beckett finished off his scoring rout and slammed the ball down over the line for his forth try of the day. The tigers could have had another try in the game at this point as Young Joel Allard went charging down the wing towards the try line after a great lay off from his backs teammate. Unfortunately after running fifty meters just before scoring the ball slipped out of Allard’s arms. Norwich dug deep after this and worked their way up the field after a good break, they managed to get themselves in a scoring position. Norwich eventually got the ball over Broadland’s try line but Asa Morrison expertly got under the ball to hold up the ball and prevent the try. At the next scrum Yarmouth won the ball back and counter attacked headed up by Rob Burling who found another gap in the defence, but was caught by the last defender. Rob Burling managed to pop off a pass from the tackle to his son Alec Burling for him to score under the posts for the tigers. The referee told both sides that there was only five minutes left of the game and Norwich wanted to get them on the scoreboard. Their hard work nearly paid off but they were thwarted by some amazing tigers defence and great pressure from Joel Allard to prevent the try and force the forward pass. The home side won the next scrum kicked the ball out of play and the final whistle was blown.
To the delight of all the players realising that with this great performance and team win they had guaranteed promotion for next season.
2nd XV M Beckett, L Lovick (capt), J Dwyer, A Morrison, S Ledgerwood, L Haylett, J Dudley, K Wilkes, A Burling, A Payne, J Allard, C Calnon, T Weston, J Murray, R Burling
Subs: P Abel
Try Scorers: M Beckett (4), L Haylett (2), K Wilkes, R Burling, T Weston, J Murray, L Lovick, A Burling
Conversions: T Weston 7/11
Grosvenor Casino Man of the Match: Matt Beckett