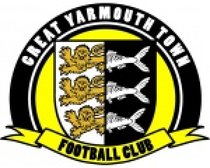 Great Yarmouth Town Football Club was formed in 1897 with most of the players being drawn from two very successful local clubs, Yarmouth Fearnoughts and Yarmouth Royal Artillery, who between them had won the Norfolk Senior Cup for the previous four years.
The players' experience obviously told as the new Town club won this trophy in its very first year, defeating Lynn Town 4-3 in a replay after a 0-0 draw. Then, between 1902 and 1906, Yarmouth were to prove invincible in the same competition, again beating Lynn on each occasion! In total, Yarmouth have won the Senior Cup thirteen times and have been runners-up a further fifteen times.
Founder-members of the Norfolk & Suffolk League, Yarmouth won this championship in 1914, 1927 and 1928 before joining the newly formed Eastern Counties League in 1935; they have been ever-present members since, and are now the only club to hold this distinction following Lowestoft Town's elevation to the Ryman League. During this period Gordon South was smashing in the goals accumulating 298 in a 28 year spell. He is still the all-time highest scorer today.
After the Second World War, the Bloaters - now with semi-professional status - gained national recognition for their FA Cup exploits, reaching the second-round proper twice! The first-round proper was reached for the first time in 1947 when they lost at home to Shrewsbury Town in front of 4160 spectators. Then in 1952 a Wellesley crowd of 3889 witnessed a first-round proper 1-0 win over Guildford City, but a 1-4 home defeat to Wrexham in the second round (crowd 6963, a new record) dealt that season's exit; in 1953 the Bloaters' finest hour saw them defeat League side Crystal Palace 1-0 in the first-round proper in front of a still-record crowd of 8944! Second-round exit came at then-League club Barrow, 2-4.
Other cup exploits over the years include eight appearances in the first round proper of the old Amateur Cup, and one in the second round. In 1952 the East Anglian Cup was won for the only time, and - on what we night term the "domestic front' - the Eastern Counties League Cup has been won three times to date, in 1938, 1975 and 1981.
The late fifties saw a return to strictly amateur status but it was not long before a revival of fortunes saw paid players return and with them, finally, the ECL title in season 1968-69; however, this remains the sole occasion so far.
Ex-Norwich, Newcastle and Sheffield United winger Bill Punton then took the reigns for what proved to be a 21-year spell, making him the longest-serving manager of the club. This was also one of the club's most successful periods: although the league title proved elusive Punton led the Bloaters to two runners-up spots, four Senior Cup triumphs, the two League Cup wins of '75 and '81, and to within one goal of Wembley in the FA Vase in 1983. Then, as the first ECL club to get that far, Yarmouth lost on aggregate to eventual winners VS Rugby in the semi-final, despite a phenomenal goal by prolific striker Neil Hart - a Yarmouth legend - to set up a tense extra-time period in the second leg at the Wellesley in front of another, but now rare, 4000plus gate, the first since those heady days of the fifties.
It was in the last season of Punton's tenure that he introduced a young Paul Tong to his managerial team but 1990 was a year of change with both Punton and Tong moving on to Diss Town and long-serving club official Jack Pegg retiring.

The club experienced a dip in fortunes in the early nineties until Paul Chick and Donny Pye were appointed, but after two moderately successful seasons this pair also moved to Diss when Punton retired from management. Ironically, Tong then returned to the Wellesley as first team boss and stayed seven years, making him the second-longest serving manager after Punton. In this period the club revived its Youth U18 side and this has been, and continues to be, a successful breeding ground for new talent.
During this first managerial spell at Yarmouth for Tong, the club won the ECL Millennium Trophy, one year after being runner-up, and reached three consecutive Senior Cup finals though disappointingly losing all three. After Tong left for a second time, the club suffered relegation to the First Division in 2005 and a period of short-lived appointments concluded with appearance record-breaking goalkeeper Nick Banham who formed a unique partnership at the club with his wife Julia as Chairperson.

With the club then heading for financial meltdown in late 2008, an appeal for help in the local media resulted in local businessman Stephen Brierley assisting in the resurrection. When Banham resigned as first team manager, Yarmouth stalwart Kevin Cruickshank stepped up to the plate and was then joined by the returning Paul Tong, and the pair set about rebuilding the team side of affairs at the Wellesley.
After a difference of opinion, the pairing broke up and Tong remained as sole manager, taking the club back to the Premier Division as Ridgeons Division One 2009-2010 champions and achieve a first-ever promotion for the Bloaters. And happily, with relations now restored, Cruickshank returned to the Wellesley as Reserve team manager. However the fortunes were short lived with the side relegated in 2010-11 which is where they stayed for 5 years. The brighter side of 2010 also saw the club awarded Charter Club status by the FA, and expansion of the youth programme saw the club running a number of youth sides. This has grown in statue and the club now boast at least 10 youth sides of both boys and girls.
In 2011-12 due to poor committee management the club again hit severe financial problems, which almost ruined the club to extinction but recent times have seen a dramatic change in fortunes.

In 2014-15 Yarmouth almost gained promotion back to the Premier league but just fell short in 4th and in the same season where runners up in the ECL 1st Division cup, beaten by Sudbury and Woodbridge. 2015-16 with the outgoing manager leaving for fierce rivals and neighbors Gorleston and taking half of his successful squad with him Great Yarmouth Town appointed 2 young managers in Adam Mason & Martyn Sinclair on the back of their local football success. The pair gained promotion in that season at the first time of asking to return the club to the Eastern Counties Premier League (step 5). In a very positive new era for the club there have also been off the field improvements. Chairman Kevin Cruickshank who has had over 25 years association with the club in various roles along with Ben Stone as new vice chairman were appointed in February 2017 in a restructure of the management committee.
The club is running a number of sides, namely; the First XI, Reserves, U18, and a number of youth teams including girls sides. With the last 10 years demonstrating some unwelcome change and instability Great Yarmouth Town are now looking to create sustainability, re-build reputation and plan for a bright future.