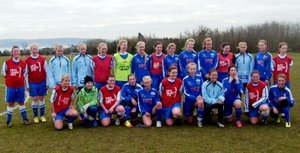 Fossum show their strength in deep and beat Lisburn.

In today's game at Greenisland Fossum IF Norway, showed the depth and quality in their squad by defeating Lisburn Ladies in a closely fought contest. The game was entertaining from the start with Lisburn leading 3-2 at half-time. However following a half-time team talk by coach Fossum took control in the second half, running out 5-3 winners.

Following the game both teams enjoyed some Greenisland hospitality (Veggie Soup, Wheaten Bread and Irish Stew) and Fossum were officially welcomed to Greenisland by Counciller May Beattie and Carrickfergus Deputy Mayor Terry Clements.

Tomorrow, Sunday 3rd March, Fossum take on NI Under 17 and Under 15 Squad at the Dub, Malone Road Belfast.
Kick-Off's 10.30am