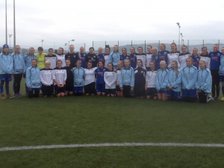 Fossum our Norweigan visitors continued there successful tour with a 3-2 victory over Northern Ireland U17's at the Dub to-day (3rd March 2013).

Northern Ireland started quickly and following a defensive mix-up scored after just 1 minute. Stunned and unsettled Fossum found it difficult to get into their stride, but not for long, as they dominated most of the first third through stylish passing from the back.

Northern Ireland pressed high early in the second third and didn't allow Foussum to play out from the back, scoring a second goal from a corner. Again it took Fossum a little while to recover composure, with NI bossing the game during most of the second third. However Fossum breaks were dangerous and through one of these breaks they scored a good goal and with that they were transformed, confidence grew and they quickly equalised.

The final third was controlled by Fossum, who at this stage were playing flowing football and creating a numberous goal scoring opportunities. NI continued to battle and had one or two chances of their own, but with virtually the last kick of the game, a great shot from 20 metres won the game for Fossum.

Well played Fossum and good luck to Northern Ireland as they continue preparations for this month's Euro's, were they have drawn France (24th March) and Spain (26th March).