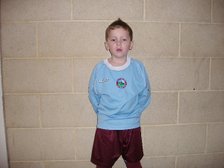 The coach is never gonna hear the end of it.

Greenisland Rovers yet again played superbly in this 3 x 12 min match against Antrim Rovers up at he Valley on this fine and crisp Saturday morning. The boys were outstanding from start to finish, but I must pay a special tribute to Corey Sloan who has just turned 7, scored his first hat-trick since his induction into the squad. With Aaron Mills and Curtis Gamble rock solid all over the pitch, the boys were very comfortable and did'nt take long to open the scoring. To be fair to Antrim, half their boys are in the 2007 age bracket and should be more than a match next year in the under 8's. Yet again, everyone of the boys were brilliant and tried everything I asked of them. It shows the togetherness when anyone scores a goal, the boys are over, giving each other high fives and congratulating each other. James Bleakley and Lewis Seeley running the midfield and Tyler Kelly and Corey Humphries working hard, and as usual the Christopher Gourley trying his flicks and turns to get the crowd doing the Mexican wave. To sum up an entertaining and fairly comfortable match, the boys done the business as usual, but when Coach Sloan shouted out "GOAL THE WINNER" with a minute to go, he thought he was going to get lynched by his own players. Thankfully James Bleakley came up with the last goal to round up a great performance. Well done to the three goalkeepers today, only letting in two goals between them. Corey Humphries, Lewis Seeley and Christopher Gourley. A great team effort boys, I am proud of each and every single one of you.