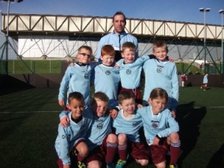 Greenisland Athletic took on Antrim Rovers on a fresh Saturday morning at the valley leisure centre, Athletic started the game brilliantly and opened up the scoring with Jay Gamble again scoring a thundery shot past the Antrim shotstopper.
It wasn't long before it was two, again Jay Gamble scoring another cracking team goal, cooly slotting past the goalkeeper.
Confidence was flowing within the Athletic team and they were winning the ball back and shooting on sight and they went into the first break winning 4 1 with further goals from Jack McColl and Ben Cambridge

The second third was more of the same from athletic with Lewis Mulligan Cj Clayton and Dylan Moore all adding to the goals with some great attacking football, as the second third ended the score was 10-1 to athletic.

The final third was a bit different with the boys being encouraged to show skills and take on other players, this brought more goals but also showed the boys the importance of defence as Antrim pulled back 4 goals in this third, this was short lived and Athletic finished the match on a high with further goals and a match win.

Greenisland Athletic played this encounter with only 6 players due to Ceth Livingstone and Alec Foster both being unwell and we hope they feel better soon and are looking forward to them both being back next week in our final game.