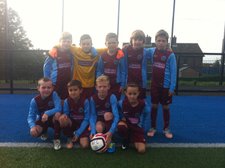 Greenisland took on Carnmoney FDC in a local derby encounter and came off tops with an impressive 4-2 win.
If Greenisland thought they were gonna stroll through this match then they were in for a rude awakening when after only 5 minutes they found themselves 1-0 down when Carnmoney broke down the right and and tapped in from the cross. Grennisland reshaped and got back into their passing stride and it wasn't long before they equalized when a swift attack down the right by Joel O Rourke resulted in a Charlie Redmond well taken goal.
The first period was finished off in style when with what probably was the goal of the season for Greenisland 06s when a swift counter attack from the back consisting of at least 7 or 8 passes found its way into the Carnmoney net from Nikhil Mcfaul. The second period started a bit slower and the lack of concentration at the back allowed Carnmoney to equalize straight after the restart. Once the team found their composure again Sam and Samuel led from the back in the absence of Aaron Mills and produced some fast counter attacks one of which resulted in a James Bleakley goal to take the lead again 3-2. The game was wrapped up in a similar move only this time from the right when Joel Fee and Nikhil linked up well who in turn slotted the ball across the box for Jay Gamble to smash home.
As much as it nice to win a football match the performance and style of football we played was the icing on the cake on today's Greenisland performance and hopefully bodes well for our boys in the future. Well done again guys keep up the good work.
Share via
FacebookTwitter
https://www.pitchero.com/clubs
Recent news