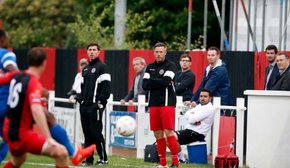 Alexander and Mackie depart the Borough

The Club can confirm that they have reluctantly accepted the resignations of First Team Manager Gary Alexander and his assistant, John Mackie, due to the Club’s current financial constraints.

The board would like to thank Gary and John for their effort and commitment following their appointments in December 2015, and both will be remembered fondly due to their success at the Club: winning promotion from the SCEFL in 2015/16 before qualifying for the Ryman South play-offs the following season, ultimately being defeated by Corinthian Casuals in the semi-final stage.

Tom Carlse, Liam Hickey and Huseyin Torgut will take charge of the Club’s trip to Hastings United tomorrow before a permanent successor is named early next week.

The Club can also confirm the departures of Club Captain Mark Phillips and forward Charlie MacDonald. We’d like to thank both for their service to the Club and wish both well moving forward.