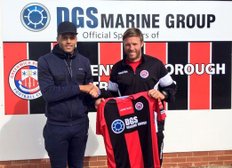 The Borough swoop for the ex-Canvey Island centre-back.

Greenwich Borough are delighted to announce the signing of centre-back Luis Morrison, after he departed Canvey Island.

The tall defender joins the Borough, after making 10 appearances for Canvey Island this season already, and made an appearance against Greenwich Borough in the 1-0 friendly defeat to the Essex side this season.

Morrison began his career playing for Arsenal and Stevenage before moving over to Finland and Sweden to get league experience. He returned to England, where he trialled for Leeds United and Newcastle, before enjoying spells at Farnborough, Hereford United, Maidenhead, Hampton & Richmond Borough, Grays Athletic and Concord Rangers before signing for Canvey Island in the summer.

The 6 foot 3 inch defender also achieved fame outside the world of football, after appearing on reality TV show Love Island.