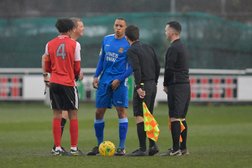 No Chance to Survive

Playing against all odds

After season 18-19 of an unlawful eviction the club has never been able to pick up any momentum and have fought a battle behind the scenes of nothing but constant interruption. It has taken great courage from players and managers to take the steps to work through this trying time and “play football”. The club being told it’s a club to club issue for an unlawful eviction with other more severe issues going on was nothing but leaving the club isolated and confused.

Being overcharged from the start and to have the ground sharers steal and keep property that did not belong to them and poster the grounds with notices the last day of the season with committee members from Greenwich Borough working for them.
No court papers, no forfeiture and no court bailiff. Is this football? where is the law and do we just turn a blind eye in this modern day. Greenwich Borough need no order for this action the only order that was needed was one to show how Greenwich Borough could have been evicted.

With the ground-sharers keeping property that if were to be removed would expel them from football as they would breach licensing, kicking Greenwich Borough FC out was a case of there were no millionaires in their club, The fact is the late David Skinner estate did every thing to make the ground what it is. The landowner had 3 leases he threw around and one in particular a one year heads of terms, formed by a well respected consultant who made admissions once this came to light that he no longer handled affairs for the ground and to leave him alone. This would be tones all over the place, former managers slandering the “new club” but the club paying £11,000 for 2 weeks of expenses and when questioned players and staff hurled abuse. False contracts created to squeeze money from the club all reported nothing done by the relevant people.

With constant disruption the club contacted the landowner on the 14th April 2019 to inform him that we would no longer be continuing at his ground. The landlord then started to move fast to unlawfully evict with assistance this disruption was not the actions of one man but many.

Cray Valley officials already spoke with Greenwich Borough youth teams to prize them over to play for them destroying the clubs revenue and reputation and the youth teams leaving. The 25th April we had a call from our committee member to explain he was being hurt and the cctv was taken out and locks changed ...... the landlord called around for cause and effect to ensure the players and supporters were deflated before even turning up to play with laminated posters designed with Greenwich Boroughs equipment declaring a eviction with no court seal (a child like poster with no legal jargon of an eviction or bailiff notice). The landlord felt comfortable to call one of the managers to discuss “rent” and why the eviction took place, causing further unrest in the first team group.
The decision to move ground regardless of where we played was a desperate decision as the club needed peace.

We thank the people with the good hearts that helped and supported the club and for those who joined in the bullying that’s something you will have to deal with as it was nothing but low and degrading acts of people who wanted to gain things they never purchased.