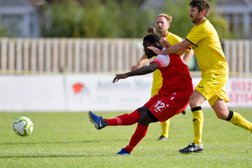 The borough Beat The Paper Boys

Back to Back wins

Today we welcomed K Sports to the Mayplace on this lovely Saturday afternoon after our recent exploits in the FA Vase. We now return to the league format after a run of 4 games unbeaten, and our aim was to carry that through today to gain some momentum.

The management team decided to start the same starting 11 from Tuesday nights FA vase win over Banstead, another positive was the depth on our bench which was bolstered by the new arrivals of striker Stephen Ita and young Defensive Midfielder Jethro Hudson and we welcome them both to the boro. We also parted company with Jojo Ogunbiyi & Antuan West we wish them both well on their football journeys.

the game today started at a ferocious pace with both teams attacking from the start we were more fortunate after 4 minutes after some great footwork by the impressive johnny miller who set's up Fred Obasa to finish with aplomb 1-0 to the Borough.

However this lead didn't last very long after some poor defending by us allowing the K Sports striker somehow dribbling past 2 players into the box and was eventually upended by Skipper Ricky Joseph!!! penalty K Sports skipper Jason Perry dispatches the penalty on 6 minutes 1-1 Lewis collier having no chance with the penalty.

The game now starting to see a regular pattern of play after we start to up the tempo in the middle of the park with Richard Jimoh going close after some great work down the left from johnny miller we should have scored on that occasion again the K Sports keeper now being the busier of the 2 keepers.

We get our reward after some continuous pressure from our offensive players, and what a great goal and finish it was from in form striker Fred Obasa again some excellent footwork from Richard jimoh to set up obasa for his second on 38 minutes 2-1 to the boro.
again the ever impressive Richard jimoh is causing the K Sports defence problems chasing a loss cause into a chance but can't quite finish from an acute angle, then Johnny miller gets another chance!!! he should have done better and that would have killed the tie.

Second Half
K Sports have started the better of the two sides in the second half and are keeping the ball really well dominating the midfield, we really we need to start keeping the ball better when in possession as this can only invite pressure.

After some frustration Yellow card to Fred obasa which breaks up K Sports momentum & possession, this allows us to regroup we get some rest-bite on the counter attack with Richard Jimoh who is fouled on the edge of the K Sports box should have been a red card for the K sports defender as he was the last man, free kick to us in a very good area however our delivery is poor still 2-1 to boro but not convincing at present
Greenwich Borough make the first Substitute new signing Jethro Hudson on for kemo Darboe to stiffen up the midfield whilst it's 2-1 K Sports are still in this game. However whilst we have jimoh and miller on the pitch we always have a chance. again this time Richard jimoh "LOBS" the K Sports goalkeeper with the ball bouncing at pace and goal bound the ball somehow goes over the bar Richard jimoh can't believe it!!!!!
We make another sub the tireless Johnny miller of for new signing Stephen Ita the game is one sided with K Sports now creating opportunistic but Greenwich borough stand firm and resolute in defence with skipper Ricky Joseph marshalling his troops. We really need another goal to kill off the K Sports resistance .

Greenwich Borough Gaffer Ben kotey makes make one more tactical change Brian Zepo on for the excellent Richard jimoh we are still holding on and give a dubious penalty away on the edge of the box K SPORTS are looking for a penalty the ref gives it but is immediately consulted by the lines man who advises the referee that he the K Sports striker fell outside of the box free kick.

The free kick is in a dangerous area!!!thankfully the delivery is poor and we survive K Sports are in the ascendancy and push all their men up to the halfway line,which in turn leaves space open for us to now exploit and after 85 minutes we get a counter attack Brian zepo one on one with the K sports keeper Zepo coolly slot’s home 3-1 to the boro, again another chance falls to the K Sports striker he dribbles through 4 defenders in the box as nobody is prepared to touch him!!! but superbly saved again by Lewis collier........ wow we finally see the game out.