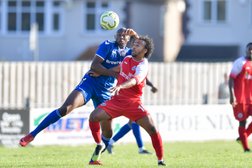 As expected it’s a very lively start to the game, both teams playing with high tempo and enthusiasm.

Greenwich Borough create the first good attacking opportunity of the game, committing bodies forward a counter attack on 6 minutes from Beckenham leads to a good cross from the left. The ball falls to the feet of Beckenham Town left winger, who steps inside to easily unleashing a great drive into the top corner.

This put the Borough on the back foot for the next 5minutes, an injury to captain Ricky Joseph (replaced by Khalidu Sesay)didn’t help the situation, however the team settled well and started passing the ball around with composure and intent causing Beckenham to drop deeper as the half went on.

Cracks started to appear and chances followed, Fred Obasa was influencing the game down the right, causing the left back all sorts of problems.
Following some good work in midfield a defence splitting pass left Fred with only the keeper to beat, however his composure let him down snatching at his shot, providing and easy save. Again down the right, an excellent pass from the impressive Billy Muckle had Obasa through on goal again, this time going for power he blazed his shot over the bar. The supporting Richard Jimoh was screaming for a cut back on the penalty spot.
The positive news for the borough at this stage it was one way traffic, towards the closing stage of the half some good ball retention see Sam Fitzgerald receive the ball, with Obasa dropping short to receive, an overlap from Kwasi Amoah, picked out ball Fitzgerald the full back provided a superb cross for for Kemo Darboe to score at the far post.

The second half could not have started any worse for the Borough conceding a corner in the first 2 minutes of the half, some lapse defending handed Beckenham their second goal, again Borough on the back foot.

The Boroughs response was once again was positive, lead superbly by Jason Mensah the boys played with intent to keep the ball and move it across the field stretching their opponents midfield on numerous occasions.

The introduction of Ollie Bennett for Richard Jimoh, allowed Borough to force their opponents back towards their own goal.
Chances started to come along, with numerous missed opportunities to capitalise.
With 5 minutes left a great cross from Muckle sore the on rushing Darboe meet the cross infront of the stranded GK to equalise.
At this stage there appeared to be one team that would win, The borough smelled blood and threw bodies forward, the referee indicating 4 minutes of additional time.

Beckenham’s experience was evidential during the last few minutes, counter attacking the exposed Borough. A silly foul by the right corner, provided our opponents the chance to out the ball in our box, to which a soft corner occurred.
The resulting corner see the ball bouncing around off the bar, a last ditch lunge from Mensah sore the ball bounce in to give our opponents another goal and sadly 3 points.

A very positive display against a top 2 side, which probably see the borough have 70% counts for nothing with cheap goals conceded.
However these types of performance certainly provide optimism going into the exciting mid-week fixture with Glebe. Our opponents have a new manager whos well known to the borough, yet we hope to put on a show for the fans with the aim of getting some points on the board.