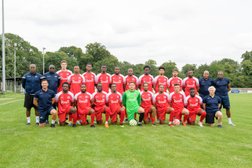 Good afternoon & welcome to the Mayplace Ground home of Greenwich Borough Fc
We would like to wish a warm welcome to all the players and officials of Stansfeld Fc and our match officials to the Mayplace Ground for the Kent Senior Trophy fixture. We hope you enjoy your Sunday afternoon's football entertainment and all have a safe journey home.
After Saturday’s disappointing loss to Beckenham town we turn our attention to a well anticipated midweek SCEFL Premier League fixture at home to Glebe.

Again a quick turnaround of midweek fixtures the management team shuffled the pack once again due to unavailability injuries & suspensions to the following personnel Lewis Collier, Ollie Bennett, Johnny Miller, and Jason Mensah (2) Veejay Miller & Ricardo Joseph all missing.
We still had a decent pool of players to pick from with quality new signings goal keeper Charlie Cloke, & Kalidu Sesay.

From the start of the game our intentions were quite clear with Fred Obasa playing one of his previous teams and seemed intent on proving a point, he went very close twice however he had a third opportunity to score from an acute angle which he “blazed over the bar”. Once again in reality he should have squared the ball to the unmarked Richard Jimoh in the box Boro were in control of the game and on the front foot with Jimoh going close with some fine footwork but unable to find the net. We again and had a host of chances to kill the tie after 30 minutes. However on 35 minutes Glebe had a chance to score with just Charlie Cloke to beat but hit the post definite wake up call for the boro it is times like now you fear those early missed chances could come back and bite you
Half time 0-0

The second half starts with a fizz and intensity from the glebe team who now realise they could get something from the game, boro’s midfield quite not coming to terms with pace and pass accuracy of the glebe team. Within the space of 5 minutes an opening for us we open up the glebe defence with a slick pass from Darboe to Jimoh who should score but his shot is blocked by the glebe centre back was that the chance we was hoping for. Boro start to show some vulnerability in certain areas and glebe get a chance which is hooked of the line by Fitzgerald close!!!! The gaffer ben Kotey makes his first change Shaq Richards of for Stephen Ita on 54 minutes, Glebe on the attack again double save by Charlie Cloke the boro keeper is having a good debut. Glebe in the ascendency and now playing with purpose they get a penalty after some poor defending by nelson on 60 minutes Philpot takes it for glebe and its brilliantly saved by Charlie Cloke still 0-0. Concentration for the boro team is key now as we are now under siege from Glebe however it doesn’t last as Philpot goes on a mazy run and scores for glebe on 64 minutes great finish Glebe 1-0 Greenwich boro.

Within the space of 2 minutes we go up the other end and get an immediate response with a great finish by Fred Obasa after 66 minutes he really should be on at least 3 goals in this game Greenwich boro 1-0 Glebe the game has definitely come alive.
Glebe regroup and the dangerous Philpot is now on a mission and going passed our players for fun, he gets his second after 68 minutes a fine run on the right from the glebe winger and simple tap in finish 2-1 Glebe they get another chance to make it 3 with an easy header but hit the post boro are struggling to contain the front 2 of glebe. However we then we start a bit of a fight back with Obasa and Darboe linking well but to no avail.

The game starting to run away from us we get 3 successive corners in the dying minutes the third was a gilt edged chance for Jason Mensah to score with his head but he puts it wide from 5 yards!!!!!!!!!! the first half performance has cost us once again you don’t take your chances you don’t win football matches a bitter pill to swallow considering we should have rapped this up by half time.