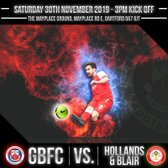 Today we entertain Holland's & in the SCEFL premier a few more new faces coming into our squad with the addition of Ollie Andrews from Phoenix sports. And we welcome back our striker Malik Ouani who starts from the bench.
Talking about Phoenix sports,the pitch as usual looks in pristine condition thanks to Phill Leeds and his ground staff.
Todays fixture was our 3rd meeting in the space of 2-3 months and we have not been victorious yet.
The game itself for us was to try and consolidate the opponent and not get bullied by their physicality.
We did that and gained a free kick on the edge of their box after 8 minutes,we should have scored from the resulting free kick alex Nelson going close hitting the post but the follow up was an embarrassing miss!!!!! Not going to mention the name on that one.
The game settles down both teams trading with little combinations of play but to no avail.
However after some sloppy defending by Borough from a corner Blair react quicker and go 1 up we could clearly see this is something they have practiced on numerous times utilising their height & physicality on set pieces
Stephen Ita has a gilt edge chance to score to get us back in the game but his shot lacks conviction or any intent!!!! These are the chances that we need to put away.
A possible come back on the cards for Borough......We rally but cant seem to string 2 passes together and get unlucky with a penalty against the run off play.
The big 10 for Blair has conned the officials here and won his side a penalty which he dispatches on 44 minutes bad time to concede!! the score at half time
Greenwich Borough 0-2 Holland's & Blair

The second half we come close to a reprieve back into the game with ollie Andrew's doing very well on his debut up against the "Giants" in Blairs midfield.

The game is starting to have a regular pattern we miss our chances,they take theirs and on 56 minutes Blair get their 3rd after again some atrocious defending by Borough a gift for Holland & Blair 3-0

The gaffer makes a sub with the introduction of Malik ouani on 65 minutes.
He looks lively up top and gives our midfield a reference point in regards to our offensive play.

We score on 75 minutes after a neat through pass to Malik who rounds the keeper and scores from an acute angle 3-1.

Blair start to lose their shape and tire but we just cant find the final ball with 10 minutes to go we get another chance but not taken.