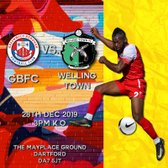 A well earned, deserved win from our boys at Borough

Saturday 28th December saw us entertain Welling Town at Mayplace road, our last meeting away to Welling Town ended in 1-1 draw which in fairness we were the better side in that game.

Our squad again altered with new signing Tarik Ibrahim coming straight into the starting line up after his transfer from Sheppey United.

We also still had the long list of injured absentees alongside Oliver Andrews who is away on holiday.

Our previous scheduled game at home to Bearsted was postponed as we fell victim like so many others in the SCEFl to the weather.

Todays game starts with both teams going close early on, with Welling Town looking the more dangerous on the counter attack,better finishing from them and we would be trailing by at least 2 goals within the first 7 minutes

First booking of the day for Welling Town Foul on Stephen ita, nothing comes from our free kick however we then allow Welling to play through us and they score 1-0 after 21 minutes a poor headed clearance from Borough's defence.

We start to control the tempo of the game now after some decent offensive play we start to peg Welling Town back in their half.

From a resulting corner we get a shot on goal which is saved on the Welling Town line we should have scored there!!!!

We pile on the pressure and finally get our rewards great cross on the left from Mehmet Piro to the front post Malik ouani on hand with great deft finish on 36 minutes 1-1 come on Borough.

We have come alive the "belief" is now evident in our play, with skipper Alex Nelson alongside Tarik Ibrahim and Callum Edward's now dominant in the middle of the park.

The game is now stretched after 40 minutes of the first half with Fred obasa and Steven ita now continuously getting passed their opposing defenders,but somehow we cant find the final killer pass.

Welling Town come out all guns blazing they win numerous Free kicks and should have scored from at least one of them Borough get lucky.

Welling Town are now camped in our half as they pile on the pressure,vejay Miller of Greenwich Boroug takes a calculated risk with the ball at his feet his actosd his own penalty box and gets lucky and we clear our lines.

Some more sustained pressure from Welling Town which results in us we giving away another silly free kick away in a dangerous position, the second ball is recycled and Welling Town get fortunate as we dont clear the ball and they score 2-1 after 57 minutes we are our own worst enemies sometimes!!!!!

No respite for Borough as Gk Daniel Mamas pulls of another great save corner Welling Town we clear our lines this time with some great footwork by centre back centre back (Ehizoji Onabhagbe) alias Martin who plays a through ball to Malik ouani who coolly finishes on 70 minutes goal Borough 2-2.

We are starting to find pockets of space in and around the welling town half and are well in the ascendency, and it pays off Nelson with a shot on the edge of the box goal 3-2 after 74 minutes Borough finally take the lead!!!!

However the lead does not last to long some poor defending from the borough defence and Welling Town equalise on 79 minutes 3-3 what a game!!

This game is becoming a classic with end to end attacking football as both teams fighting for the win.

Fred Obasa with a run down the right wins a corner for Borough from the resulting corner he recycles the ball with a great cross for Stephen ita to head home 4-3 on 83 minutes, we are now in the lead however with kamikaze defending from both teams they may well be another twist before the 90 minutes are up ...the question is can we hold on as Welling Town wont lie down or be beaten just yet.

The game still has 7 minutes of normal time and its backs against the wall stuff for Borough as we survive the Welling Town onslaught and take all 3 points.

Fantastic performance from the Greenwich Borough squad today they played with the "BELIEF" that the management have been instilling in them all season, as the gaffer stated let's finish 2019 on a positive and so we did come on the Borough.

We march on into 2020 with a very positive outlook.