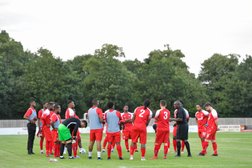 Todays away fixture is first for me today having never attended or played at the Mayfield stadium it was refreshing to see some new scenery on our travels after last weeks disappointing home result.

This game was on the verge of being postponed due to the inclement weather of late, however Saturday morning's bright sunshine put that uncertainty to bed!!

The team again had a couple of changes after the departure of Malik ouani we brought in young left sided player Andrew Dythe on loan from Phoenix sports, the gaffer also giving local Croydon boy Hermes Mengi an opportunity at right back.

The pitch from a distance looked in decent condition, however once we started we got a better understanding of the true playing surface.
The Game starts at a slow pace with Croydon trying to enforce their physicality within the first 10 minutes but we compete well and carry a threat on the counter attack

We get an opening after 14 minutes great cross from Callum Edward's to tarik Ibrahim who should score but his header is straight at the keeper.....chance we should be winning.

We are starting to come into the game now with Oliver Andrew's making some timely challenges we get a fortunate opening with obasa on 20 minutes poor finish should have scored there 2 chances now missed by the Borough!!!

Free kick Croydon on 30 minutes post!!!! let off for Borough mamas had no chance.

We start to make some progress on the counter but obasa keeps running into offside positions to often!!!! Frustration on the borough bench very evident.

We dont clear our lines and the Croydon playmaker no.8 oloyede scores with a crisp left foot drive from 18 yards on 40 minutes
1-0 Croydon

Penalty shout Borough not given not sure what the referee saw there!!!! Nailed on penalty for me.

Half time sub obasa of for eniye

Game now being played at Croydon's pace not ours we get frustrated and referee books Mehmet piro.

Oliver Andrew's and Callum Edward's have been excellent in the the midfield we get a consolation on the 89th minute Borough score from a set piece Onoabagbe with his first goal for the club 2-1 he deserves that with another decent performance at the back we try with one last overload but to no avail final score 2-1 Croydon.

If we had taken our gifted chances in the first half there would have been a completely different complextion on this game....