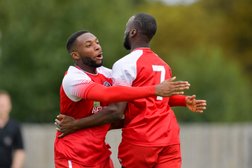 The Brough Through To Round 1

The Cannons Starting To Fire

After last Saturdays FA Vase match away to Molesey which was abandoned due to our goal keeper Lewis Collier sustaining a double break to his right arm!!!! we reconvened the fixture on the evening of Tuesday the 17th September.

with the quick turnaround of this fixture the management team had quite a task in rallying the troops for this particular replay,with the unavailability injuries & suspensions to following personnel Lewis Collier,Johnny Miller, Jason mensah(1) Veejay Miller, Shaq Richard's, Brian Zepo & Jason Mensah (2) all missing. We actually went back to Molesey with a bare 12 players this was going to be a tough task with many of us also having to take time off work to fulfil the fixture, our determination was clear and our commitment in getting to the next round was of the utmost importance to the management players & especially the club.

in fairness to Molesey and how the first game went before the abandonment we bossed that game and had a host of chances in both half's which could of killed the tie and this replay, however needs must and we fielded a side with a very offensive feel about it, young Karsharne Foster making his first full appearance alongside Stephen Ita who was also starting his first full game in midfield. We also had to call upon the services of university bound 1st choice GK James Boughtflower as he was the only person available to us in the FA Vase.

the evening it self was perfect for football clear skies cool breeze flood lights & a decent home crowd, however we start with the better chances with obasa carrying on from Saturday's performance with a driving run and shot after 10 mins.

Molesey's first attack of significance was a free kick on the edge of our box after some clumsy defending by Fitzgerald however the shot is blocked from the resulting free kick and play resumes. our midfield quite clearly are getting pulled about by Molesey possible due to our inexperience or a misunderstanding between the debutantes, however 1st team coach Anthony Gradley decides to alter a few things and gives some coarse words of encouragement to his midfield the game is starting to settle both teams finely balanced Molesey get a fantastic chance to make it 1-0 after 25 minute's but some how miss the target let of for the Borough.

the game progresses with a few more clumsy free kicks however molesey getting the rub of the green from the match officials, they have had the better set piece opportunities but the delivery and execution from therm has been poor
half time 0-0

the second half starts with a fizz and intensity from us as this game has to end tonight either way the tempo has gone up a few notches again needless free kicks being given away by boro!!! but dealt with by our defence. Ricky Joseph has now got his defence defending in the right areas with some timely challenges going in, finally some quality from us great ball over the top to Richard Jimoh who chases it down keeper comes out of his box makes a clumsy save Jimoh quick to react and lobs the rebound over and in to the top corner 1-0 to the Borough after 49 minutes it was on the "cards" great finish.

Molesey react with a snap shot on the edge of the box from their number 9 again great save by Boughtflower, Kwasi Amoah goes on a run down the right and is pushed in the ribs and looks out of the tie with Elle our physio treating him on the sidelines for some time.

However he wants to continue!!!!!!! boro need to keep the ball better as the industrious Alex nelson rallies his midfield troops to keep it tight and compact in the middle. With the tireless billy Muckle at left back working up and down the line like a man possessed. However Molesey keep probing and get another chance this time they must score but somehow Boughtflower pulls off another fantastic point blank save "Gordon Banks Esq".........wow how they missed that one only they know but it was an excellent save regardless.

We are now opening them up on the counter with our pace and this time Fred Obasa makes no mistake with a clinical finish to kill the tie 2-0 to the Borough on 74 minutes. the game you would think is fizzling out but Molesey come back again going close cross come shot we make a final sub Kwasi Amoah off on 82 minutes for defender Ryan Green come on the Borough lets see this out boys.

one more twist to the tie Molesey get a penalty on 88 mins after a miss timed dive by goalkeeper Boughtflower this could be their chance back into the tie as we have 6 minutes injury time.......
saved by boughtflower this guy is unbelievable diving to his left and pushing the ball away that i would be their last meaningful effort and the referee blows for full time yes get in...........