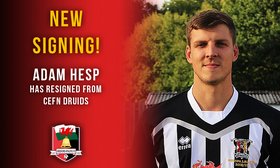 Gresford Athletic have today completed the resigning of Adam Hesp on a permanent transfer from Cefn Druids.

The defender previously spent the 2019/20 season on loan at the club.

The 28-year-old had spent his entire career at Cefn Druids, coming through their academy and eventually becoming a mainstay in their first team lineup and one of their longest-serving players in the squad.

Adam has plenty of experience in the JD Cymru Premier with Cefn Druids, as well as some experience in Europe with him playing some games in the UEFA Europa League qualifying rounds during his career.

He unfortunately suffered a horrific ankle break during the 2017/18 season, which kept him out for 18 months, but he recovered fantastically, playing some of the final games of the 2018/19 season with Cefn Druids.

Adam first signed for Gresford Athletic on loan in the 2019/20 season, playing 18 games, winning seven and earning one man of the match award.

This is the club's fifth signing of the day ahead of the 2020/21 season and adds another option to an already impressive defensive selection at the club.

Welcome back to the club, Adam!