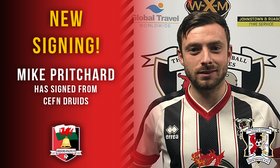 Gresford Athletic have today completed the signing of Mike Pritchard from Cefn Druids.

The forward has built up a wealth of experience in the JD Cymru Leagues, playing in both the JD Cymru Premier and JD Cymru North during his career.

He has previously played for Rhyl, where he worked under Gresford Athletic first team manager Eddie Maurice-Jones, before signing for Prestatyn Town, staying at the club for two seasons.

He then played for Cefn Druids for the first time in 2016, spending two years at the club, before transferring to Llay Welfare and then joining New Zealand club Melville United. After four months, he then returned to Cefn Druids for a second spell in 2019 in the Cymru Premier, until he signed for Gresford Athletic today.

Gresford Athletic first team manager Eddie Maurice-Jones gave his thoughts on the signing:
"I am delighted to have signed Mike Pritchard. Having worked with Mike before, I know exactly what qualities he brings. He's a very inteligent footballer with a vast amount of experience at JD Cymru Premier level. Mike is technically very good and adds quality to a very talented group of players. We all look forward to welcoming him to Gresford Athletic."

Mike is the club's sixth signing ahead of 2020/21 season, continuing to build on the already talented Gresford Athletic squad heading into the new season.

Welcome to the club, Mike!