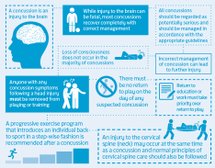 Wellbeing and Education 9 of 10

Concussion is an injury to the brain, which results in a disturbance of its function. There are many symptoms of concussion, common ones being headache, dizziness, memory disturbance or balance problems.

Concussion can be caused by a direct blow to the head, but can also occur when a blow to another part of the body results in rapid movement of the brain, e.g. whiplash type injuries.

The symptoms of concussion typically appear immediately, but their onset may be delayed and can appear at any time after the initial injury

It's important to remember that loss of consciousness doesn't always occur in concussion – in fact, it occurs in less than 10% of cases. Because of this, a concussed player may not have fallen to the ground after the injury, they could still be standing.

Concussions can happen to players at any age. However, children and adolescents (18 and under) are more susceptible to brain injury. They also:

How to recognise concussion

If any of the following signs or symptoms are present after an injury, you should suspect that a player has a concussion and remove them from play or training immediately – with no return on the same day.

Any one or more of the following visual clues can indicate a concussion:

Speaking to the player

To help establish whether a player is injured, you can ask them a number of questions: incorrect answer(s) may suggest that they have a concussion. Some examples questions can be seen below – tailor them to your particular activity and even:

What to do next

If a neck injury is suspected, suitable guidelines regarding the management of this type of injury at pitchside should also be followed.

If any of the following are reported then the player should be transported for urgent medical assessment at the nearest hospital emergency department:

In all cases of suspected concussion it's recommended that the player is referred to a medical or healthcare professional for diagnosis and advice, even if the symptoms resolve.

The FA has launched 'Concussion for players: lessons from the pitch' – a film aimed at raising awareness among players about the importance of recognising and responding to symptoms of concussion.