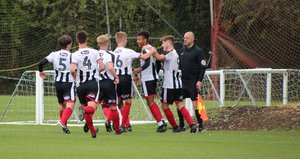 What a week - and now another big week ahead for the lads!
Grimsby Town youth team coach Callum Lester

The young Mariners are currently second-place on 43 points, one behind league leaders Doncaster Rovers – who came from behind to beat Huddersfield Town 2-1 at home at the weekend.

And the title race will now go down to the final fixture on Saturday as Town host seventh-place Lincoln City, and Doncaster travel to 10th-place Notts County.

That’s because Joe Starbuck bagged a powerful header in the 70th minute as the Mariners beat Oldham 1-0 at home last weekend.

Both sides had lots of future scholars on display, in what was a close encounter in the opening exchanges.

Neither side created any real chances in the first half as it became scrappy, with both defences standing firm but the goalkeepers not really troubled with a few long-range shots.

Town started brightly in the second half, with Blakeley and Owoeye coming on, and got on the front foot when Starbuck went close from a free-kick.

And Adlard also had a good chance as he cut in from the left and pulled a shot off, but his strike went narrowly wide.

Town turned the screw as the half wore on, getting more possession and controlling the game, but the Latics showed good strength to keep the Mariners out.

And they almost got a surprise lead, as they managed to force Battersby into a couple of smart saves on the break.

But Town claimed all three points with a 1-0 win thanks to Starbuck’s powerful header on 70 minutes, following Potts’ corner.

The young Mariners host local rivals Lincoln City at Cheapside on Saturday in the final game of the season as they look to win the EFL North East Youth Alliance (10.30am) – if Doncaster drop points away at Notts County.