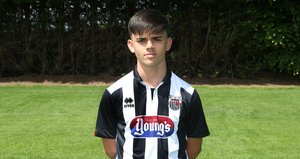 Grimsby Town youth team made the perfect start to their Youth Alliance Cup group campaign as they beat Chesterfield 3-0 at Cheapside.

Neil Woods’s side started brightly and on the front foot in a well-contested battle in the opening stages.

And they got their breakthrough on 18 minutes when Brandon McPherson got in behind the opposition and rounded the goalkeeper to make it 1-0.

Harvey Drinkell doubled Town’s lead shortly after, as he rounded off some good play with a great run and finish.

And, soon after, Town extended their lead further as McPherson’s touch inside found Luis Adlard who lifted it over the goalkeeper to make it 3-0.

The second half began in the same way the first half finished – the young Mariners created a number of chances to add to their lead.

McPherson, Adlard, and Joe Starbuck all came close, but the Spireites goalkeeper was in top form to keep them at bay as it finished 3-0.

Town return to EFL North East Youth Alliance action as they welcome Scunthorpe United to Cheapside on Saturday (11am).