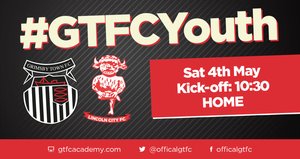 Grimsby Town youth team could win the EFL North East Youth Alliance as they welcome Lincoln City to Cheapside on Saturday (10.30am).

The young Mariners are currently second-place on 43 points – one behind league leaders Doncaster Rovers who travel to 10th-place Notts County (11am).

And Neil Woods’ side will be crowned champions this weekend if any of the following permutations happen:

• Town draw with Lincoln, and Doncaster lose by a four-goal margin (due to Doncaster’s superior goal difference)

Town – who have won their last two league games – go into the game with plenty of momentum, following Joe Starbuck’s late header to secure all three points against Oldham Athletic last weekend.

And they will be hoping for a third straight victory as they go head-to-head with local rivals Lincoln City on Saturday.

The Imps are out of form ahead of this weekend’s clash, and are winless in six league games.

They drew 3-3 away at Bradford City last time out, but lost four straight games prior to that, and will be hoping to finish the season on a high on Saturday.

Town drew 1-1 away at Lincoln on the opening day of the season, and will be looking to claim all three points against the Imps this weekend.

Elsewhere in the title race, Doncaster travel to Notts County who have picked up two big away results in their last two games - a 5-1 win over Rotherham United, and a 4-1 victory at Bradford City.

No matter what happens this weekend, it has been an amazing campaign for the youth academy – and we would like to thank everybody involved for their help this season!