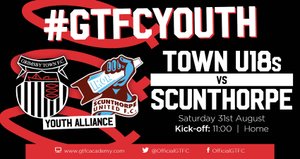 Neil Woods’s side got their Youth Alliance Cup group campaign off to the perfect start last time out as they beat Chesterfield 3-0.

The young Mariners got the win thanks to first-half goals from Brandon McPherson, Harvey Drinkell, and Luis Adlard.

And the young Mariners will be hoping to kick on, and carry that momentum into this weekend’s league clash with Scunthorpe United.

Forward McPherson was impressive in Town’s cup win over the Spireites last weekend, scoring the opening goal at Cheapside.

And he will be looking to continue his good form and contribute to another victory for the young Mariners on Saturday.

Scunthorpe are second-place in the league so far this season, on six points after their first two games – three places and three points above fifth-place Town.

And the Iron will be hoping to have continue their good start to the campaign and have a positive season, after finishing second-bottom last term.

After this weekend’s clash with the Iron, Town are away at Chesterfield in the EFL North East Youth Alliance on Saturday, September 7 (11am).