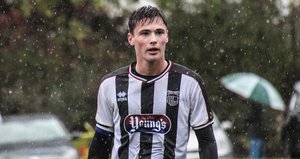 Below is their piece on Town youth team’s dramatic league title win.

Mansfield Town’s three-year supremacy at the summit of the North East section came to an end in May after Grimsby Town sealed silverware in a dramatic season finale.

Doncaster Rovers appeared to be heading for the title when they overcame the Mariners 3-0 at the end of March, with 26-goal striker Rieves Boocock bagging a hat-trick.

But they gifted away top spot on the final day after suffering a 2-1 defeat to Notts County, while Neil Woods’ Grimsby edged a 1-0 win against Lincoln City thanks to first-year apprentice Lennon Stead, who broke the deadlock in the 94th minute after keeper Ollie Battersby had earlier saved a penalty.

County were also responsible for pushing third-placed Bradford City out of contention as they triumphed 4-1 in April, with the Bantams completing the campaign three points adrift.

And they also wrote a feature on Town promoting youth academy graduates to the first-team, which is below.

Grimsby Town have displayed their commitment to bringing through their youngsters by involving three current apprentices this season.

Brandon Buckley was the first to experience competitive action, appearing as an 86th-minute substitute at Doncaster Rovers in the Checkatrade Trophy.

Striker Rumarn Burrell, recently signed by Middlesbrough, forced his way into manager Michael Jolley’s plans after a prolific goalscoring record at youth level, with the 18-year-old featuring for the latter stages of a Sky Bet League Two defeat to Stevenage in April.

Elsewhere, first-year defender Mattie Pollock, who was included in LFE’s ‘The 11’ shortly after signing his first professional contract in February, made his senior bow four days after Christmas, playing the final 40 minutes of a 2-1 win away to Exeter City.

We would like to thank the LFE for their features. Hopefully we can continue our progress in 2019-20!