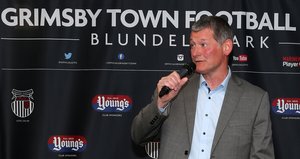 Grimsby Town youth team manager Neil Woods hopes the club’s academy can continue to produce players for the first-team over the coming seasons.

It's all about the production of players. Our remit is to get as many players into the first-team!
Grimsby Town youth team manager Neil Woods

Woods guided Town’s U18s to their first ever league title as they won the EFL North East Youth Alliance on Saturday.

But he believes the main focus is ensuring as many youth products make the step up to the first team, after Ollie Battersby, Mattie Pollock, Jock Curran, Brandon Buckley, and Rumarn Burrell were all offered professional contracts this season.

He said: “The real icing on the cake was to come to the first-team game where there were three lads on the bench, and two playing, because ultimately that’s what it’s about.

“Winning leagues is great – it puts us on the map to a certain degree, and rewards effort – but we are there to produce players for the first-team.

“And you see five involved, and you understand the circumstances with it being last game of the season.

“But you see Max Wright make his full home debut and you see Rumarn Burrell come on – that’s ultimately what it’s all about.

“Harry Clifton seems to have become a first-team regular, and we need to now get more of these into that situation.

“Ultimately our remit is to get as many players into the first-team.

“It gives momentum to us, but you have to be sensible. Winning the league is great – it’s a reflection on the quality of players you have – but it’s not what it’s all about.

“It’s all about the production of players, and we have to be sensible in where we go.

“We’d like to replicate this because that would mean we have enough of the type of players that we want to progress.

“But the reality is it’s not going to keep going like this – a massive plus for us is that of our new intake of nine players next year, six have come from our own academy again.

“So that’s the type of figures we’re looking for, and obviously more people playing regularly in the first-team.”

And Woods paid tribute to the players who weren’t offered professional deals, despite playing vital roles in the youth team winning the league.

He said: “It’s very pleasing for everybody who has worked in the academy – the work that has gone on over the two-and-a-half years since I’ve been here.

“It’s also a reward for Ian Fleming, Adam Smith, the PPAG, and the YDA – everyone who has kept the academy going over the hard times when we were out of the EFL.

“It’s tinged with a bit of sadness because there are five lads – Conley Poynter, Ollie Saunders, Kyle Richardson, Emil Powles, and Tom Jamieson – who came very, very close to getting professional contracts.

“And they played 99 per cent of the games so the lads who should be celebrating it are obviously disappointed.

“They’ll be very pleased that their hard work has been recognised in one way, but we feel sorry that they’re not there to celebrate it.

“The immediate thoughts were for everybody who’s put so much work into it all, so the players, and all the coaches from under-nines, to the recruitment, to the physios – everybody plays their part for something like this to happen.”

The full interview will be available to watch for free on Grimsby Town's official YouTube channel shortly.