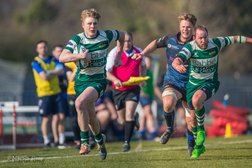 The Great Escape is still on.
For a while yet anyway and while results elsewhere did not exactly sit kindly with Jordan Reynolds’ side it was, nevertheless, another decent day for a Raiders side given terrific support by a big Garenne Stand crowd.
There has been no shortage of drama at Footes Lane this season so this thriller almost seemed par for the course.
It ebbed and flowed throughout only to be won by the home side late on.

Initially, Dings struck first, after Guernsey fell off a tackle to allow Dings No.8 Jake Holcome to score and Harry Tovey to convert and make the lead 7-0.
Raiders then produced a trademark catch and drive score with Tom Ceillam on the end of the move and stand-off Owen Thomas levelling the scores with the conversion.
Thomas slotted over a penalty to make it 10-7 before Dings worked their own catch and drive move to score and go into half time 12-10 in front.
Sam Steventon returned his side into the lead with a second home try early in the second half, but a penalty from Tovey levelled the scores at 15-15.
Then a welcome bonus for the home team.
The visitors were reduced to 14 for 10 minutes as replacement prop James Hall was shown a yellow card for taking out a Raider off the ball.
Guernsey made the most of their one-man advantage, working their way down field and then forcing a 5m scrum which led to three penalties against the seven-man visiting pack before the referee finally awarded a penalty try.
Having done all that hard work, though, Raiders quickly gave it back as Dings broke down the right and James Allen was sent clear to slide in under the posts.

Tovey then missed a long range penalty and instead the final word belonged to young Raider, Tom Teasdale.
Douglas Horrocks and then Malcolm Barnes made a terrific break and laid off the pass to the Academy product who touched down for the winning score and perhaps crucial bonus point.
But to spice up the drama, Owen Thomas’ touchline conversion hit the crossbar and bounced the wrong way from a Raiders point of view, leaving Dings with the opportunity to snatch a last-gasp victory if they could conjure something.
But some Guernsey defence kept them at bay and the dream lives on.
Next stop Henley.