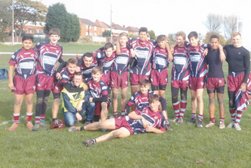 What a performance & Result!

Rangers started well in the 2nd half with early tries to Matthew Laird and Murphy Smith which were both converted by Jacob Waugh,
Mikey Dolan then scored again through a move down the Blind side off the play the ball but Jacob Waugh could not convert this as he slipped when kicking which ruined his 100% record for the day with his boot. Jacob Waugh then scored after dummying his way through the line and handing off the fullback to score and also converted his own try, Luke Thompson then intercepted a ball on his own 10m line and raced 90m to score, again Jacob Waugh converted, Matthew Laird completed his hat trick after crashing through between the posts and again Jacob Waugh converted before Keighley scored late tries to make the final score 58-22 to Rangers.

All in all a great performance and effort by all 10 players and a personal haul of 22 points to Jacob Waugh and a hat trick of tries to Matthew Laird and a pair of tries to Mikey Dolan and Luke Thompson.