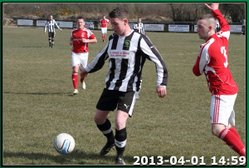 Today we secured the double signings of fans favourite Scruff from Llanerchymedd and Kieran Lewis who was unattached.

Mark returns following a brief spell at WA2 side Llangefni where he enjoyed his share of the goals. We hope he brings this form back with him to Gwalchmai. Scruff however is cup tied for this Saturday's Welsh Cup match against Greenfield.

Kieran Lewis signs having been unattached this season after focussing on his running events over the summer months. Kieran played an integral role in Llangefni Towns promotion from WA2 last season.

Welcome to the club!!!