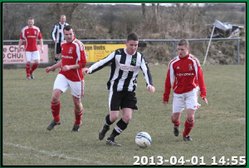 Today we welcomed long distance travellers Llandyrnog to Maes Meurig where the pitch looked immaculate and the weather was bright sunshine and not a drop of rain or gust of wind in sight.

With Darren and Jon (both our full backs) missing we lined up with Wally between the sticks, John Jones slotted in at right back, Gafyn and Alun at centre half with Geth Davies deputising at left back. In the middle was Gerry holding the fort behind the energy of Bennett, Allman and Kieran with Corey and Scruff spearheading the attack.

The game set off at a lightening pace with the enthusiastic visitors looking to attack quickly and very directly, not what you wanted in sweltering heat. Regardless of their hunger and might Gwalchmai weathered the early storm and soon fell into their rhythm as we exploited both flanks with ease. The visitors inexperience in central defence was evident as we stretched the back four time and time again, through balls a plenty were played to our attacks to which they relished.

On 15 minutes we appeared to have found the break through after some tidy play found Scruff/Mark Griffiths clear in front of goal as he slotted home the flag was raised. despite this we continued to attack in droves, on 24mins Kieran Lewis picked up the ball in midfield he played in Corey Sinnott over the top who slotted home with ease, 1-0.

The next 10 minutes was filled with incident as the visitors had a goal disallowed following a long diagonal ball from right to left, then it was Gwalchmai who had their second goal of the match disallowed as Scruff was played in yet again, he lobbed the keeper only for his nemesis the linesman to raise his flag.

At halftime we were confident that we were the better side however were more than aware that the next goal was crucial. We started spritely and took the game to the visitors hemming them into their own half and forcing them to rely on the counter attack, yet again both flanks were exploited by Geth and Kieran on the left and Bennett and John on the right.

On 57 mins we scored that all important 2nd goal as Paul Evans's great vision played a terrific ball to Bennett who slotted in Mark Griffiths to score his first following his return to Gwalchmai colours, 2-0.

Only minutes later we increased our lead, this time John Jones played a ball which found the only bobble on the pitch, the defence were unable to recover as Scruff homed in on goal, making a fool out of the advancing keeper he sealed his second and Gwalchmai's third on 60 mins, 3-0.

On came young Cameron (spice boy jr) for Gerry (spice boy snr), and he made an immediate impact, in his first minute he clattered his opposing midfielder, perhaps this was an expression of his youthful enthusiasm. However only a minute later he showed great talent as he chipped the ball over the Llandyrnog defence for Scruff to home in once more and secure a magnificent return to the Burn-A-Ball in a hat-trick on 77 mins, 3-0.

On came Gareth Roberts for the last 15 minutes and yet again he showed great awareness and vision, it was only a shame that the game was now won and our legs were tired and our vision lacking to keep up with him. On 85 minutes Allman ballooned the ball to Mars and the game fizzled out to a convincing conclusion.