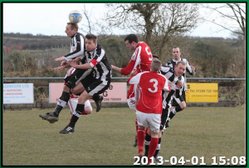 Another tough encounter against a top 5 side saw us welcome Llanrug to the burn a ball on a sunny yet cold and windy day Easter Monday.

Kenny lined up in goal; Jon, Andy, Steve.S and Thomo were the back four; Gerry, Allman and Craig were in the middle with Ryan, Scruff & Loggs up top.

From the first minute it was evident that the game was going to be a bit of a ping pong affair with both sides rushin the play. For the majority of the 90 minutes Gwalchmai seemed to edge the teritorial and posession game, yet failed to make it count.

The visitors looked to play quick long balls for their pacey front men and emphasis the abilities of Phillips & Dyl Midges passing ranges. Despite this Gwalchmai's defence lapped it up on the majority of occasions.

In the first half Gwalchmai exploited the flanks, especially through Jon Williams on the right side, bombing on at every given oppurtunity and causing havoc to the visitors defence. Jon was excellent in both defence and attack and must have been in contention for the Man of the Match award.

Both sides enjoyed spells of posession and cause half chances but clear cut ones were few and far between. The Llanrug striker broke free on 25 mins only to squander a 1 on 1 chance, at the other end Ryan Taylor was judged offside as he homed in on goal, Scruff missed a half chance and the visitors goalkeeper pulled off a great save from Loggs before the break.

It was 0-0 at half time, we felt we might have deserved the lead at the break. In the second half the first chance came within 3 seconds as Dyl Midge struck from the centre only for Kenny to make a finger tip save onto the bar, an excellent strike and save to match (it was wind assisted mind).

Both teams huffed and puffed to nil effect. Then on 70 mins Scruff lost the ball in the oppositions half which allowed them to counter attack, they homed in on goal and the forward struck, he beat the keeper but was foiled by Steve Sinclairs heroic exploits on the goal line. From the resulting corner Ryan Taylor lost his man who headed high into the Gwalchmai net with Kenny's efforts unsuccessful as the visitors took the lead.

Gwalchmai looked to fight back and half chances fell to Steve Sinclair, Scruff, Ryan, Gerry, then a 3 point clinching save from the visitors keeper stopped Craig Evans from becoming the homeside's hero as he pulled of an amazing save at point blank range. FT 0-1.

This wasnt the most attractive of fixtures with both sides failing to create in the final third, it was a bit like football tennis at times, yet it was an even match, and a draw would have been fair. We didnt deserve to lose - however thats not how it works in football. 3 losses on the bounce and Holywell up next, it doesnt get any easier.