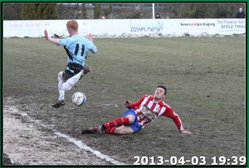 Thrilling 4 all draw! - but we might have snatched it!

A midweek trip along the A55 to title chaser Holywell. We arrived at what was a soaking wet and potentially dangerous pitch, however credit where credit is due - the hosts had worked tirelessly to host the game following heavy snow last week.

We lined up with an unchanged 4-3-3 against the home sides 4-4-2 on a very wide pitch, would this cause us problems? To be honest i dont think it did.

The first few minutes were played at 90mph with the ball being a bit of a ping pong. As the game settled the hosts applied some pressure and won a corner, as the ball was played in it cleared everyone only to fall to the opposite winger who floated the ball back in for the centre half Mark Orme to head home and make it 1-0. Minutes later it was 2-0 as a poor clearance by Steve Sinclair and a poor touch by Allman let in Steve Thomas who jinxed past 3 Gwalchmai men to find the net.

This kicked us up the backside and we took the game to the hosts. Scruff struck hard only for the home keeper to make an outstanding save and tip it over the bar. Allman then burst into the box only for the ball to slide past the far post agonisingly. Then there was a series of blocked shots before Mark Loggs struck home on 21 mins to make it 2-1.

We were now matching the hosts and taking the game to them. Thats when it got a bit messy as the man in the middle lost the plot. Quoted as saying 'i dont need to whistle to let you know its offside' - I always thought a player was told to play to the whistle. He then decided to book a Gwalchmai player for 'shouting' (not at him), in the same instant he pushed another Gwalchmai player - surely not acceptable?!!?

This stoppage in play distrupted Gwalchmai and the hosts counter attacked, the winger Thomas was clearly yards offside as he slotted home and made it 3-1 at the break. We felt hard done by, but also felt as if we werent out of it....

Immediately after the break we yet again felt hard done by as Holywell won a corner, the ball was whipped in and the cb Orme literally caught the ball before slotting home to make it 4-1. Yet the decision went against us and we had a mountain to climb.

In the second half and yet again matched the hosts applying great pressure in the middle of the park through Allman, Ryan Taylor and Craig. We were the side playing the better football, where as the hosts looked for quick, early, big boot balls over the top.

On 52 mins our pressure and patience paid off as Ryan Taylor caught the defence unaware and whipped in an early corner for Allman to rise above everyone and header down into the net to make it 4-2.

Minutes (59) later Scruff was the architect as he whipped a ball into Loggs at the back stick who beat his man and bent the ball into far corner beyond the flapping keeper, 4-3 GAME ON!!!

We were then forced into changes with Gerry and Steve.S struggling... our pressure eased off slightly, yet we continued to be the better side. Loggs missed a clear cut chance firing over, half chances went begging to Craig and Ryan.

As the game reached its close we pushed everything forward in search of our deserved point (if not 3). We were rewarded at the death. Both Craig & Andy fought fiercely for the ball and it was Andy who slotted home from close range to make it 4-4 - what a game!!

Tonight we showed character, belief, courage and some old fashioned Gwalchmai pride. We desrved the point, if not all 3! Lets take this performance into the coming games - if we play like we did tonight we will no doubt be up there come end of the season.