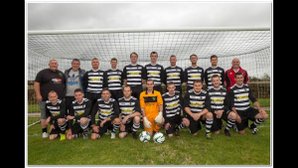 A blistery evening in Bodedern in the spring sun welcomed us for this derby match where the home sides pride was at stake and where we looked to build on back to back wins against Junction & tonight's hosts.

We won the toss and chose to play into the strong wind in the first half. From the off Bodedern looked to stamp their authority on proceedings and immediately pressed the ball high up the pitch, this with the added element of the wind proved difficult for Gwalchmai.

Despite failing to get out of our own half for long spells during the first half the home side didn't create any clear cut chances of note. Yes they were the better side and enjoyed the majority of possession but struggled to find that killer ball.

We looked to keep things as tight as possible until the break, however luck wasn't on our side as a ball was played through to the Athletic attacker who miss controlled, Jon intercepted and the ball ran into the welcome arms of Kenny... or so we thought, however the referee had other ideas and was easily influenced by the tame appeals of a back pass from the home side. From the resulting free kick Bodedern hit the back of the net to make it 1-0 on 35.

This wasn't a disaster, with rallying shouts and reassurance of a second half attack we looked to see out the half as there was no sign in us scoring against the wind. 5 minutes later Bodedern attacked again and the ball fell to old boy Burgess who struck a deflected shot into the top corner, Kenny had no chances, HT 2-0.

In the second half we immediately appeared to improve and upped our efforts. Our attackers managed to get into the game more as we were no able to play the ball better. Despite this the home side proved to play against the wind far better than we did, their strikers never letting the defence play out an easy ball, their midfielders pressed well and their back four mopped up any threat we held.

The game now fell into a case of us looking to attack but creating only half chances, despite numerous corners and the home side looking to counter attack through Gaz Wyn on the left wing who caused havoc on the ball.

Gwalchmai's pressure paid off with a free kick 25 yards out, in an ideal position for specialist Sinnott who hit into the top corner to make it 2-1 and provide us with a glimmer of hope.

As we attacked in numbers we continued to fail to provide that final ball or clear cut chance, in the dying moments the home side counter attacked and through went Boylan to go 1 on 1 with Kenny who almost saved only for the ball to agonisingly find its way into the net,
FT 3-1.

Tonight the better side won... Bodedern wanted it more than us and took the lead roll from the off. They played best with the wind and against it and almost bullied us out of the game. Yes the referee wasn't the best but he had no influence on the result - they were better than us and we didn't produce.

There were limited clear cut chances for both sides, but the hosts took there's when they were presented with them. Their forwards worked tirelessly and never let our back four settle and play out, yet their right back especially in the first half attacked with ease on numerous occasions. Tonight was a derby match yet there was a lack of hard grit and determination shown and when we went 1 and then 2 behind some heads dropped where as we should have come out fighting and shown more pride.
We need to learn how to defend from the front, and we need to learn to fight, we need to learn to take our chances as in some games you might only get the odd one or two presented to you. The first goal was either naïve or a poor decision, the second was a deflection but there was some poor defending prior to this and the third goal was when we were going all out it was always a risk but one we had to take.

Lets put this one to bed and rally round again before Saturday where we'll look to bounce back against Glan Conwy on the worlds smallest pitch.