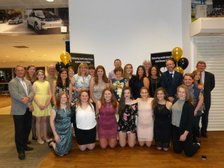 Gwent Hockey Club is the biggest club in South East Wales. Once separately known as Newport HC and Cwmbran HC, these two clubs merged first in 2009 with the women joining later in 2011. Gwent Hockey Club has won Club of the Year in 2014/15 and 2016/17, winning the title twice in three years. We unfortunately missed out on the award in 2019/20, although were nominated. Our Girls were awarded Youth Section of the Year in 2019/20.

Here at Gwent, we pride ourselves on having a large, and successful, youth section that feeds into our senior squads. We run multiple youth teams for boys and girls, with the U9 squads being mixed and from U11 and up being separated into boys and girls. We have teams of mixed abilities from U9s all the way up to U18s, and these youth squads have had plenty of successes in the past few years alone. We welcome players from reception age and above. Our youth play mostly monthly matches, and compete in Cup/Plate tournaments at the end of the season. The youth squads have seen some great success in the Finals over the years.

Many of our youth are also involved with the regional teams, and we have had the pleasure and honour of seeing so many past and present players even making international selection and competing in major competitions.

This success is mirrored within our senior squads, with plenty of our senior players having also seen international selection. We have four men’s and five women’s squads, all of mixed ability and experience. Both men’s and women’s senior sections have also seen Cup and Shield appearances, and our Ladies First team have also represented Wales in the European Club Championship II in 2015 at Prague, Czech Republic.

Gwent Hockey club is a friendly, welcoming, and supportive club and we are always looking to welcome more in to our Hockey Family. We have family memberships available for those wishing to make it a family affair, and have recently acquired some lovely off-field kit for you to show off the Gwent Hockey Club logo wherever you go! We love to socialise with everyone off the pitch as well as on it, and organise multiple socials throughout the year including numerous nights out, Christmas Dinners, and a big End of Season award night at the end of it all.

We are ONE CLUB and one big HOCKEY FAMILY!