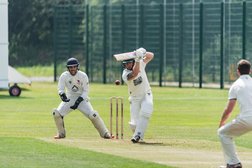 Halesowen CC are back in the top flight of the Birmingham and District Premier Cricket League for the first time in 16 years, and captain Alexei Kervezee has praised "a magnificent all-round team performance" for achieving the feat.

A 48 run victory over nearest rivals Kenilworth Wardens at Seth Somers Park on Saturday guaranteed that Halesowen would be promoted from Premier Division Two.

Halesowen have amassed 283 points at an average of 14.89 per game and ensured that they will finish in the top two.

It is the culmination of years of hard work by former Worcestershire CCC batsman Kervezee and others on the Club's Cricket Management Group and General Committee.

Kervezee has led by example and so far scored 636 runs at an average of 42.40 with four half-centuries and a brilliant and vital 151 not out against Bridgnorth.

But openers Jamie Harrison (505) and Jamie Harris (460), plus Harry Baddams (421) have also made substantial contributions.

On the bowling front, James Rudge – recruited from Barnt Green two years ago – is the joint leading wicket-taker in the league with 42 victims. At the same time, the ever-reliable Eddie Rhodes has enjoyed another successful year with 33 scalps to date.

Kervezee, who joined Halesowen after leaving New Road four years ago, said: "It is one of those things where at the start of the season we set our goals out to get promoted and to achieve those goals is obviously amazing.

"It has been a magnificent team performance all-round. We've had lads from numbers one to 11 stick their hands up at numerous points of the season, and I think it is thoroughly deserved.

"I've had a relatively good year, but the entire team has done well.

"Lads have chipped in all the way down. Everyone has got runs at some stage, and the likes of James Rudge and Eddie Rhodes, who does it year in and year out, have been excellent.

"I can't speak highly enough of the group of lads at the moment. They are good cricketers, but they are good people as well and thoroughly deserve to go up and have a crack in Premier Division One."

Kervezee has focused on changing the culture of the club since he arrived at Halesowen.

"We've got good cricketers who enjoy spending time together, who want to do well, but more importantly they want their team-mates to do well as well.

"They all are on board with the big picture of it's always about the team, not just about any single individual and what more the team can do, what more can we do to push each other and become better, and ultimately achieve our goals."

Director of Cricket Tromans paid tribute to the impact made by Kervezee and Head Coach Peter Scott.

He said: "It's an incredible achievement. We've been out of the top division of the Birmingham League for 16 years.

"Alexei came in as captain four years ago and has made an incredible impact and has led on the playing side a complete culture change with Peter Scott.

"We restructured the cricketing side, and the whole first-team squad have worked incredibly hard, and it's been great to see different people stepping up at other times.

"There have been some unbelievable individual performances throughout.

"Eddie Rhodes does the business every year and has been a top-quality performer for the club for many years.

"He is Halesowen born and bred, has come through the pathway here.

"James Rudge joined us from Barnt Green two years ago and has an outstanding season, not only with the ball as the out and out strike bowler but also with some vital innings with the bat.

"Alexei is as good as they get as a player. He is an absolute match-winner. His 151 not out at Bridgnorth when he scored a 90 ball 150 after we were 90 for seven was pivotal.

"That was a crucial stage of the season, and he has stood up and led from the front and been brilliant."