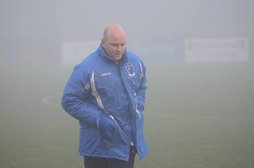 HALL Road Rangers will be at full strength for the visit of an improving Shirebrook Town at Haworth Park this Saturday.
Rangers boss Dave Ricardo welcomes back both Tom Bennett and Josh Batty from suspension, whilst striker Jamie Reeson, and midfielders Ash Allanson and Gareth Owen are all set to return.
The fourth-placed hosts are also boosted by the return of goalkeeper Phil Dobson and wide-man Jack Binns.
The only man who will not feature is striker Nathan Perks who is unavailable.
In fact Ricardo has a potential selection headache, as he must decide whether to stick with those which brushed aside Worsborough Bridge last weekend, or recall those that are returning to the fold, that have featured on a regular basis throughout the last few months to help guide Rangers soar into the play-off places.
Ricardo also has numerous permutations of potential midfield partnerships such as the strength of depth of his squad.
The two sides have met already this season in a 1-1 draw which saw Rangers dominate the game, yet they still needed an equaliser from Josh Batty, his first goal for the club to spare their blushes after missing a hatful of chances.
Immediately following that game, Shirebrook changed their manager and they have since only been defeated twice, a run which has seen them climb safely away from the bottom two, into mid-table.
Ricardo in the week pinpointed Bruno Holden and Glyn Cotton as Shirebrook's consistent performers after admitting Shirebrook's upturn in fortunes will provide his side a much tougher test then the one earlier in the season.
The visitors have finished in the top eight of the NCEL First Division for the last four years to their credit, and although the play-offs may currently be beyond them this campaign, they will be keen to build momentum ahead of another challenge next season.
Shirebrook have also had the best of previous meetings between the two sides.
Hall Road's last victory over the Nottinghamshire side came way back in September 2008, a 2-0 win, with Jamie Barnwell and Paul Palmer scoring the goals in that success.
This Hall Road side though stand every chance of recording that first win in eight years against Shirebrook with their free-flowing style and attacking mentality.
Whilst Chris Spinks is the club's top scorer on 20 goals for the season, Danny Norton, normally a right-back has netted five times in his last three games, whilst Josh Batty has already netted against Shirebrook and was registered with Winterton Rangers when Lee Hastings side won 4-0.
With Hall Road chairman Darren Sunley also extending an invite to those with Hull City season passes, those not travelling to West Ham will be granted a free drink in the Haworth Park bar should they attend with their season pass.
Ricardo is keen to see local football fans come through the turnstile to cheer his side on and see what Hall Road Rangers and non-league football is all about.
Ricardo said: “I urge all local supporters to make the game and take advantage of the hospitality in the bar and it would be nice to get a few Hull City supporters through the gate and take advantage of the free drink offer."
A win for Hall Road could see them move into the automatic promotion places in NCEL Division One heading into a Boxing Day and new year double header over Ricardo's and assistant Bill Gill's former side Selby Town.

HEAD TO HEAD –
Home and Away in all competitions since 2002

VIEW FROM THE DUGOUT – By Dave Ricardo
"Saturday gives an opportunity for us to cement our play off position and to possibly be in the top two by close of play.
It has been unusual this week as we have had no midweek fixture, the last three months have seen the lads performing at a high level twice a week all around the North of England, plus training hard.
I want supporters and followers of the club to realise the hard work that the lads are going through to get into that promotion slot.
The squad will be at full strength which will help, as we have been working at the bare fourteen players at times over the last couple of weeks, which makes our results even more pleasing.
Shirebrook will be a strong side with the likes of Bruno Holden and Glyn Cotton in the set up.
I again urge all local supporters to make the game and take advantage of the hospitality in the bar and it would be nice to get a few Hull City supporters through the gate, and take advantage of the free drink offer with their season pass."

AROUND THE NCEL FIRST DIVISION – Saturday December 17
With no midweek matches in the division, it will be a near full programme of fixtures in the division this weekend.
In possibly the pick of the fixtures, fifth placed Grimsby Borough welcome Hallam, who are four points behind Borough in sixth.
This is the return fixture which the Lincolnshire side won 2-0 just ten days ago.
Hall Road's other promotion rivals are largely at home.
Table toppers AFC Emley will be looking to see off Eccleshill United, whilst Penistone Church are also at home as they welcome Ollerton Town looking to complete the double, after their 4-1 win at Ollerton in October.
Third placed Pontefract Collieries travel to Rossington Main, looking to keep the chasing pack, including Hall Road Rangers at arms length.
Knaresborough Town welcome Campion to Manse Lane looking to halt a run which has seen the hosts winless in the last five, and Campion incidentally been the side they dismantled 6-1 in their previous victory.
This one sees two NCEL First Division goal scoring heavyweights, Eli Hey of Campion, and Colin Heath of Knaresborough on opposite sides.
At the foot of the table Nostell will welcome Yorkshire Amateur looking to close the eight point gap to Westella above them who themselves face a long trip to face fellow strugglers Teversal.
Worsborough currently just above the bottom two are without a game as are ninth placed Winterton.
Other games see Selby Town travel to Dronfield, and Glasshoughton Welfare make the journey to the Hawthorns to play Brigg Town.

VIEW FROM THE PRESSBOX – By Neil Winsor
“The first midweek break in terms of match action for Hall Road in a while, has allowed a few injuries to subside and has given the coaching staff a full week to assess the condition of the players.
The return of Tom Bennett from suspension, and Ash Allanson and Gareth Owen overcoming their injuries is a real boost, however the question remains, which player, if any, of the four that have been in fantastic form in the heart of the Rangers team does Ricardo leave out?
A nice selection dilemma but a tough one to call at that.
Shirebrook will be an entirely different proposition to the one which Hall Road drew with in October.
In a game Rangers felt they should have won, they had to rely on Josh Batty to spare their blushes in a 1-1 draw.
This is another one of those games were the opposition are more then capable of taking the points and Hall Road will need to be on their game from the first whistle.
A positive result though and results go Rangers way, and we could see them realistically in second place going into Christmas”