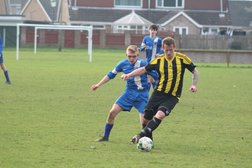 Reserves make their point with draw against LIV Supplies

Photo: Both defences came out on top as LIV's Craig Palmer tries to find a way through

HALL Road Rangers Reserves continued their improvement in form as they drew 0-0 with LIV Supplies AFC.
In a match dominated by both defences at Haworth Park, the Reserves held out in the second-half despite a barrage of pressure from the visitors.
In a scrappy opening 20 minutes, the best of the chances came from Rangers’ attacking midfielder Alex Stock.
A cross fell to his feet on the edge of the box, but his powerful effort drifted just wide of the post.
The home side had a chance not long after too. Stiker Harry Butler turned on the edge of the box and skilfully chipped the ball over the LIV defender, but it took a top save from the keeper to stop the shot.
Going short from the following corner, the cross found the head of Ben Fletcher who climbed above the LIV defence, but his driven header travelled just over the crossbar.
LIV immediately went down the other end and fired across the face of goal in the most entertaining spell of the game.
10 minutes before the break, LIV did have the ball in the net from a corner, but referee Graham Wilkin blew for a foul on the Rangers goalkeeper.
A long range effort from the visitors then hit the post just two minutes later.
LIV also began the second-half the better side with a flurry of chances just after the restart.
But in the 53rd minute, one of the Reserves best chances came to Tom Cracknell. The ball found him on the edge of the box, but he blasted over.
A heavy challenge on Alex Stock saw a long stoppage in play with 15 minutes left on the clock, which ultimately saw him taken off.
A tight game fizzled out in the last 10 minutes.
A succession of corners was defended well by the hosts, and the match ended 0-0.
Hall Road Rangers Reserves drop back down to 10th in the table despite earning a point.
Wins for Howden AFC and Westella & Willerby who sat below Rangers before kick-off both go above them.
Next up for the Reserves are league leaders Hornsea Town away next weekend