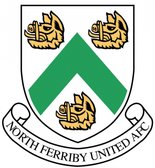 Hall Road Rangers got their pre-season campaign off and running with a tough test of their metal on Saturday afternoon as they invited newly promoted North Ferriby United to Haworth Park. Under the stewardship of new gaffa Dave Ricardo Rangers put on a sterling performance but where undone by the quality of the side many divisions above them. In a thrilling 5-0 defeat in front of a bumper crowd of over 200 the new boys in the East Park Chippy sponsored shirts gave Ricardo a lot to ponder.
After the game Ricardo was please with his sides performance. “Today's game was an excellent run out against a side full of quality.” Said Ricardo “The score line was disappointing as I thought we gave them 3 out of the 5 goals through individual errors, however today was the day to get them out of the way and the important aspect is to learn from them.”
“The lads all know that they've had a good work out which is pleasing. There were many positives that can now be taken into Tuesday's home game against a strong Bridlington Town side.”
“A massive thanks to the match sponsors and to the large crowd that I hope went away with a feeling, that even after one game, that we will have a team that looks to play attractive attacking football”
Rangers will now have a quick turn around and will be back in action on Tuesday evening when they take on NCEL division one side Bridlington Town at Haworth Park. Kick off will be 7:45pm.
Share via
FacebookTwitter
https://www.pitchero.com/clubs
Recent news