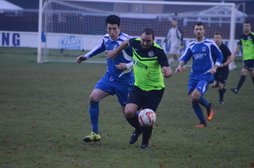 RANGERS VASE RUN COMES TO AN END AGAINST RESOLUTE BOTTESFORD

HALL Road Rangers crashed out of the FA Vase as they went down 2-0 to NCEL Premier Division side Bottesford Town.
Terry Barwick's precision free-kick on the hour mark was the difference-maker before Danny Boulton's goal three minutes from time ended Rangers Vase hopes for another year, in an even contest.
In wet conditions, the Rangers groundstaff did a superb job in the build up to the game however the conditions played their part in a frantic cup encounter.
The Rangers management team welcomed back a host of regulars such as Danny Norton, who's long throws looked dangerous throughout, whilst Chris Spinks, Tom Bennett and Sam Belcher came back into the side.
Joe Cooper who has been the standout performer in the last two games, was struck down with flu on the morning of the game, and was named as a substitute as was 16 year old Archie Brown, who's midweek strike drew plaudits throughout the country.
James Whittingham also featured from the bench.
Ash Dexter was ruled out prior to the game, whilst Phil Dobson and Josh Batty were cup-tied.
Hall Road had the better of the chances early on and had the ball in the net within the first quarter, as Scott Phillips capitilised on indecisive defending to latch onto a through ball and he calmly rolled home, only to be flagged offside.
The hosts continued to enjoy the majority of possession but lacked a killer edge and throughout the afternoon failed to test the visiting keeper.
The game turned ugly midway through the first half when whilst laying on the ground Danny Norton had the ball smashed against him, as tempers frayed and as Norton and the Bottesford player squared up, in a clear attempt to get Norton sent off the visiting player shamefully through himself to the floor after no contact was made.
Although for the large part the game was played in the right spirit, Pembleton came off the worst from a challenge with James Piercy and had to be replaced on the half hour.
The teams went in level during the break following five minutes of added time as both sides seeked the all important opening goal.
Bottesford came out the blocks quicker at the start of the second period and grabbed the opener through a picture-perfect Barwick free kick thirteen minutes after the restart.
After Rangers conceded a sloppy free-kick to the left angle of their goal, Barwick stepped up and drifted a curling effort round the wall and into the top right corner from 20 yards.
Rangers again huffed and puffed to try and break down a stubborn Bottesford rearguard without seriously testing the visitors.
Norton and Piercy would link up well from Norton's long throws.
Ricardo shuffled the pack with his changes, he introduced Whittingham to the left flank, whilst Jamie Reeson was also introduced.
Bottesford however hit Rangers with the killer blow three minutes from time when Boulton knocked past Rangers keeper Jordan Douglas to send 'The Poachers' into the Third round, and leave Rangers boss Dave Ricardo to ponder a run which has seen them overcome teams from a higher level in previous rounds, and an impending trip on Wednesday night to league leaders Penistone Church.

STAR-LARKER – James Piercy
A typical high energy display from the young midfielder. Was utilised well at the near post from Danny Norton's long throws throughout the afternoon and battled away with Tom Bennett in the midfield throughout.

FROM THE PRESS-BOX – By Neil Winsor
A thoroughly professional performance from Bottesford who defended superbly throughout and even though we had the majority of possession they limited our shots on goal to efforts from distance.
A fine run in the Vase comes to an end, but the Hall Road lads deserve a huge pat on the back for their efforts throughout the campaign which has seen them record three away victories.
It now gives us the opportunity to catch up with games in the league and continue improving on last season's points tally which is the next milestone for the club to achieve and see how far we can go in both the NCEL and Senior Cup.