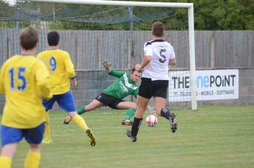 Hall Road Rangers left it til very late on Saturday afternoon to secure their win over Westella and Willerby, but their goals where worth the wait. A nine minute Scott Phillips hatrick, which started from the penalty spot on the 78th minute as Danny Norton was felled in the box, finally started the scoring for Rangers. After that the flood gates opened as Leon Sewell’s depleted Westella side capitulated.
Westella held Rangers at bay in the first 45 and probably deserved a lead at the break. But for new signing Adam Stevens in goal for the Rangers they probably would have had one. Stevens christened his debut for the boys from Haworth Park with three very good saves to keep the clean sheet and Westella out.
Phillips goals on 78, 84 and 87 set the tone though and as Mike Newitt prodded into his own net on 90 to make it four the game was sealed. It only required Dane Mortimer to add a fifth with a timely header at the back post in injury time to add insult to injury for Westella.
After the game Rangers Manager Dave Ricardo was jubilant with his sides performance “I asked the lads to ensure that we got a clean sheet and a win, to their credit they achieved this.” Said Ricardo
“However for anyone who watched the game saw for 60 minutes it could have gone either way. Adam Stevens made 2/3 excellent saves in the first half which kept us in the game. The lads in the second half were a lot better playing at a higher tempo and quality.”
“Full credit to Westella who gave it a real go. Four wins out of five so far is a great start especially when I feel we have 2/3 gears to move up but the lads are an honest bunch and want to achieve this”
Rangers will now continue their mid week training sessions before entertaining Northern Counties new boys Ollerton Town at Home on Saturday. Kick off will be 3pm at Haworth Park.