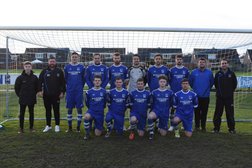 Hall Road Rangers had to roll their sleeves up and don their water proofs on Saturday as they entertained NCEL new boys Ollerton Town at home in the wet on Saturday. Their hard work paid off though as they ran out 5-1 winners over the boys from Newark and escalated themselves to 2nd in the NCEL division one table.
As the rain fell at Haworth Park Rangers started on the front foot from the very start. Jack Binns found himself in unfamiliar territory on 12 minutes as he headed in the opener to give the home side the lead.
Craig Muirhead’s well placed strike on 37 minutes doubled the home sides lead at the break to give Dave Ricardo’s side breathing room going into the second half. Ollerton duly came out and showing spirit and guile when unlucky not to find themselves back in it. But for some lovely saves from Adam Stevens who put his body on the line at every turn they would have been level.
Chris Spinks strike on 65 minutes put the fixture well and truly to bed and demolished any hopes Ollerton had of getting back into the tie. A superbly taken solo effort deceived the keeper and nestled into the net to make it 3-0. Sean Goodwin’s debut was crowned by a 4th on 79 minutes to make it 4-0 to the home side. Credit to Ollerton Town though he continued to the end. They got their reward on 88 minutes as James Munson pounced on a loose ball to make it 4-1. Rangers weren’t to be outdone though and Jamie Forrester got the last say as he slotted home to make it 5-1.
After the game Ranger’s manager Dave Ricardo was delighted “The victory today was most pleasing due to a number of reasons. From the warm up onwards the lads showed great quality and attitude.”
“ We still have a number of gears to move up but with the players we have at the club there is every chance we will achieve this.”
“I’m especially happy with the new lads Sean Goodwin and Jamie Forester getting on the score sheet as they are both fantastic talents.”
“We enjoy the night and begin setting ourselves for a an extremely tough fixture away at Eccleshill in mid week”
“ Last but not least I would like to thank all the supporters and especially the many number of volunteers that turn out before during and after the game that enable games at this level to take place"
Rangers will travel to Eccleshill on Wednesday evening looking to press for top spot in the league. The last encounter between the two saw rangers take the plaudits 4-1 in the league cup.
Share via
FacebookTwitter
https://www.pitchero.com/clubs
Recent news